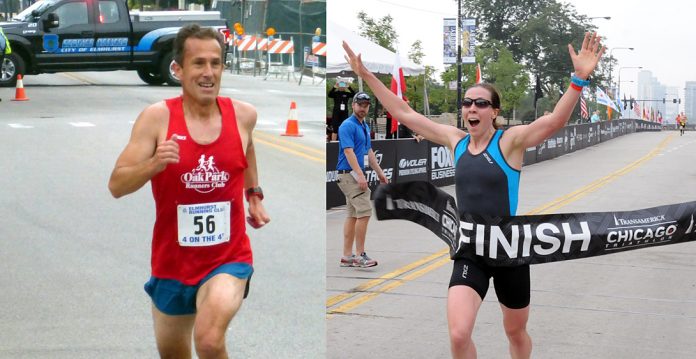 Tony Bleull
Tony Bleull’s running career started as early as grade school, and he also ran at Putnam County High School. Come college, Bleull was more than ready to run on the North Central College cross-country team, where he ran a 4:08 mile and 14:33 5K. He was eventually inducted into the NCC Hall of Fame for his talent. Unfortunately, though, after college, Bleull dealt with seven different knee and foot injuries, and had just as many surgeries. As a result, Bleull stopped running for nearly 30 years. But once he started dating his current girlfriend, Kirstin Otto, who has ran three Boston Marathons and two Ironman’s, his love of the sport was rekindled. “I would not be back on the roads if it were not for her,” Bluell says. Now, he is currently competing in the Chicago Area Runners Association’s circuit for his first time, and has completed three marathons since he started running again. His PR’s are currently at 57:16 for the 15K, 59:34 for 10 miles, and 2:51:51 for a marathon. Although he is in the 50-54 age group, he is often among the top overall finishers of his races, according to friend Paul Oppenheim, who nominated Bluell.

Jacqueline Godbe
Jacqueline Godbe’s triathlon journey began four years ago upon graduation from Northwestern University; she swam at the NCAA Division 1 throughout college, and didn’t want to give up the sport. After being dared by a friend, Godbe trained for, and won the Athena division of the Transamerica Chicago Triathlon. However, Godbe thought her racing career would end as she started medical school, but when she won her age group at the next years Chicago Triathlon, she knew she had to keep competing. “I had been borrowing a bike until this point, so I bought one and started to compete in local races… I was hooked,” Godbe says. Since then, she won the 2014 Doc Spackman Triathlon, the 2015 Capitol View Triathlon and the 2015 Chicago Triathlon with a time of 8:18:53. Godbe also won her age group at the 2016 USAT Nationals in August in Omaha, and placed fourth overall in the women’s category. She looks forward to representing Team USA at the ITU World Championships next year.