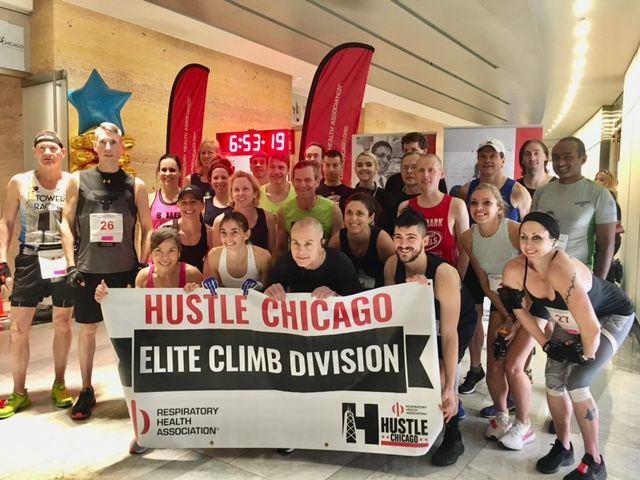 One of Chicago’s traditions is indeed taking place this year.  Hustle Chicago Charity stair climb is ready to welcome all athletes on April 18th.  This event benefits Chicago Lung Health non-profit Respiratory Health Association.  To keep everyone’s health a priority, the Hustle Chicago stair climb, formerly known as Hustle Up the Hancock, will be held outdoors at Soldier Field. 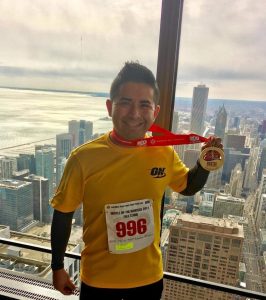 “We are excited to be able to host an in-person event for the first time in over a year,” said Joel Africk, President & CEO, Respiratory Health Association.   “We are confident that by working with our host venue and medical experts we have modified Hustle Chicago stair climb to provide a safe experience. The event gives people a chance to exercise and support our mission of healthy lungs and clean air.”

Jon Leleu of Naperville is excited to bring his family and team back to  conquer this challenge once again. Jon has participated in this race every year since 2011.  Jon said, “John Hancock is my favorite building in the world and the idea of climbing to the top sounded like blast!”   When he lost his cousin, Joey from Cystic Fibrosis, he knew he had to give it a shot in honor of Joey.  Jon spent numerous hours climbing on staircase machine in the gym.  Jon is a father of two children, Nick and Victoria, and this is their family annual event.  2021 will be Jon and Nick’s 10th climb while this is Victoria’s 7th.

Alejandro Morales of Oswego is an avid runner and he said, “It is one of the most challenging races I have ever accomplished.”  The company he worked for sponsored the race and he and his co-workers decided to take a challenge.  He hired a personal trainer to build a strong legs.  he often used kettlebells to train and also use stair climber in the gym.  His advise for a first timer is to control breathing when your legs are giving up.  It is important part of the strategy to make it to the top.

Katie Schlottman of Plainfield participated in this race in 2018 in honor of her best friend, Lindsay who passed away from Cystic Fibrosis.  Katie climbed 3.1 miles on stair climber at local YMCA three times a week to train for this race.  She dedicated entire 1632 steps for her best friend.  Katie said, “Lindsay is always with me at ever race to push me forward.”

Cathy Crawford of Plainfield has been climbing the Hustle Chicago stair climb since 2016. She also used star master at local YMCA as a training method.  When the weather is in her favor, her teammates and she trained at Swallow cliff Stairs in Palos Park, IL.  Cathy climbs for her brother in law who is fighting his battle with Lung caner. In the Hustle Chicago Stair Climb 2020, Cathy qualified for the elite division.  Top 25 finishes for both male and female in the past three years are invited to compete in the Elite division.  Cathy is looking forward to returning to climb the Hustle Chicago Stair climb with the fellow elite athletes.