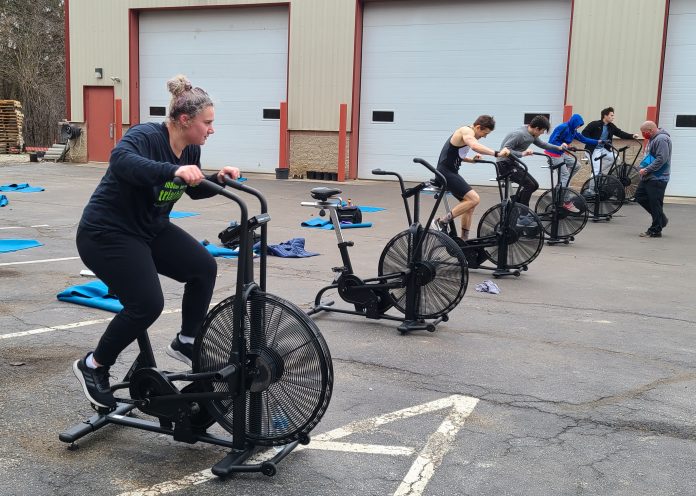 With the up and down temperatures this last week or so, varying from 60 degrees one day to 40 degrees the next, the hope was that warmth would be on our side, but alas, it was not. The event started at 7am with the first wave of participants getting into the indoor pool while outdoor temperatures were barely 40 degrees and of course there was the wind.

Keeping with COVID protocols and safety, all participants, volunteers and onlookers wore required masks and kept the 6ft social distance in-between. Obviously, participants were not required to keep on their masks once in the pool. With each wave being no more than 6 participants, they had the option of wearing their mask for the remainder of the race, since it led outside after the swim. Each wave of participants started every 30 minutes, which allowed for plenty of time in between, spacing, and an even flow to the event. 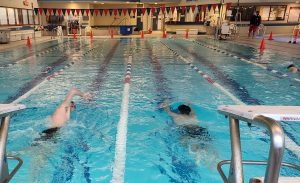 Though there was a slight delay in the initial wave time, the first wave swim began at 7:08am and went smoothly.  No matter the speed or experience, a nice 8-laps for the 400 yard swim was to be completed.  Approximately 150-200 yards from the indoor pool area, transition was set up outside behind the Assault bikes. Most participants opted to throw on their clothes while still indoors pool-side in the area parallel to their lane where they exited the pool.

Coming from a comfortable temperature in the pool, you would have thought that hitting the door to head outside to transition would have been a shock to the body.  Perhaps since I had 2 layers and opted for a sweatshirt to head to the bike, it actually didn’t seem so bad. There were participants with everything from just a tri-suit (God bless their ministry) to a small coat that braved hitting the slight downhill driveway to transition and the bike. The positioning of volunteers, water and nutrition was perfect if one needed to grab some just before getting on the bike.

Though they allow for your arm rowing to assist you in your progress, I can’t say I’m used to the Assault bikes.  If you don’t use those bikes often, it’s different from a spin bike, elliptical bike or using an indoor trainer.  As you are cycling, it motorizes the fan in the front wheel, though on a day like today, I don’t think anyone got hot on the bike…lol. 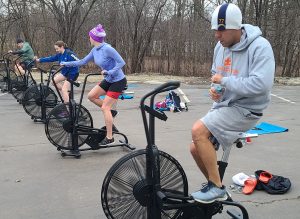 As each wave of participants transitioned off the bike, they took a slight right hand bend onto one of the paths circumferencing the Oak Brook Recreation Center and a portion of the park.  The run path allowed for a portion of it where participants ran along with the wind and even in circling back there were a few trees to somewhat help with the head wind. The run portion was a short 1.5 mile run returning back on a slight downhill slope.

As participants hit the finish line, they could see their times and in short timing how they fared.  By 10am, all participants were finished and the results were sent out within the hour.  All the volunteers and event staff were helpful and supportive by assisting participants, handing out event t-shirts, answering questions, and more. They truly braved the cold, too.  And the organization and execution of the event by Fitness Supervisor, Michael Delgado and his team was awesome.

Congratulations to the overall female and male winners, Joelle Beranek and Parker Kerth, as they each are to receive a trophy and an Amazon gift card!