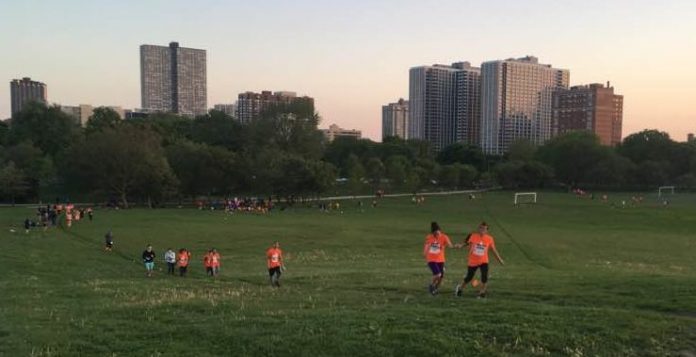 The 2017 Universal Sole Four Mile Classic took place on Thursday evening at Montrose Harbor.  This year’s race was the biggest in its history, with over 700 registered and 533 finishers, with over half of the finishers under the age of 19.  Several local youth running groups, including Students Run Chi and the race’s beneficiary, Chicago Run, participated in the race.

Packet pick-up took place at Universal Sole in Lakeview over the course of several days leading up to the race.  The Four Mile Classic offered some unique swag to participants; instead of the customary race t-shirt, participants received a custom stainless steel 16-ounce travel tumbler and drawstring bag.

Parking for the spring evening race was plentiful and easy to find near the start line.  Upon arrival at the race site, the sun was shining and I worried about being too warm-even racing just in a sports bra and shorts with temperatures in the mid to upper-70’s.  While we waited for the race to start my friends and I speculated on how the race might produce slower times given that it was one of the first races of the season in summer-like temperatures.

With minutes to go, I checked my gear and walked over to the start line with moderately low expectations for my time, given that I was only a week and a half post-Wisconsin Marathon (my second marathon in 14 days) and was quite sore from two track workouts the previous day.  Considering all of that, I was really just hoping for a sub-9-minute per mile average for the race.

The race began and I eased into the first half mile with hamstrings cursing the previous day’s track workouts.  Within a quarter mile it felt like we had entered a refrigerator with the fan on high; the first mile and half or so took runners north along the lakefront, offering no protection from the 25 mph headwinds.  I felt like I was running in place as I attempted to make forward progress.  I also didn’t have to worry about overheating any more.  Those strong winds carried much cooler air and I was actually quite comfortable (temperature-wise) while running north.

After what seemed like an eternity, (more like 15 minutes), we finally reached the northernmost point and headed south on the main lakefront trail, which offered some shelter from the wind, (though this also seemed to dampen the tailwind that I’d been looking forward to during the first mile and a half!)

It was a relatively easy mile and a half back south on the path, allowing me to pick up some speed in the third mile, before we headed west at Wilson and prepared to tackle Cricket Hill.  It wouldn’t be a Universal Sole race without a little bit of Trail Challenge thrown in; instead of taking the beaten path, (i.e. the usual paved path), to the south side of Cricket Hill, we went cross-country cutting through the grass between the west side of Cricket Hill and the Wilson Track.  I was definitely not prepared for the challenge of running for an extended period of time on grass.  I enjoyed a very brief recovery heading back east on the dirt path parallel to Montrose before embarking on the climb up Cricket Hill.

A large number of spectators from Chicago Run lined both sides of Cricket Hill, as well as someone dressed as Gumby, and cheered runners on as they tackled the final challenge of the Universal Sole Four Mile Classic.  My lungs and legs, were on fire as I crested Cricket Hill and began my descent down the north side of the hill, taking care to stay light on my feet and avoid any holes hidden by the grass.  One more turn on to the dirty path, under the bridge on Simmonds Drive and the finish line was in sight.  I pumped my arms and sprinted for the finish, knowing that it was far from my fastest time, but a very solid effort given the conditions and the state of my body entering the race.

In the 35 minutes it took me to run the Universal Four Mile Classic the temperature had dropped more than 20 degrees.  It didn’t take long for my body to cool down after crossing the finish line so I hurried off to collect my gear, very thankful that I had thought to bring a jacket for the post-race festivities.  Unfortunately, with the dramatic drop in temperature the crowd thinned out pretty quickly, with most runners leaving shortly after crossing the finish line.

Award ceremonies were held at the race site with age group winners (through third place), earning gift certificates to be used for merchandise at Universal Sole in Lakeview.  Post-race festivities traveled to the Lakeshore Sports and Fitness Club in Lincoln Park following the awards ceremonies, where runners over the age of 21 were treated to one free beer at the “after party,” as well as a nice selection of appetizers on the rooftop of the fitness club.

Once again, Universal Sole put on a challenging and well-executed race perfect for athletes of all ages.  Look for the next fun racing experience from Universal Sole at the Universal Sole Burgers and Beer 5K on Monday, July 17.