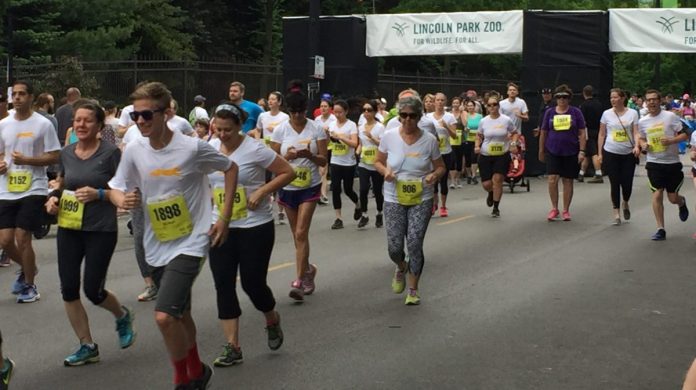 The United Run for the Zoo was held Sunday morning and offered both a 5K run or walk and a 10K run.  Now in its 39th year, this annual race benefits Lincoln Park Zoo and helps to keep the zoo free and open every day of the year.

It was a warm and humid morning for a run; prior to the race, runners were alerted to take it slow and hydrate at the aid stations located along the course that offered both water and Gatorade.

The 5K run and walk began at 7:45 a.m. at the zoo’s West Gate and featured a wave start.  It took participants north through the Conservatory gate before heading south through the zoo and Lincoln Park.  It looped back around before running up the east side of the zoo and the Nature Boardwalk and finishing on the Main Mall.

The 10K run began promptly at 8:30 a.m. and also featured a wave start.  This was the race that I ran. The race was supposed to head along the Lakefront Trail up to Belmont Harbor and then loop back around, past Diversey Harbor and the east side of the zoo before returning north through the Nature Boardwalk and the zoo grounds.  The race finished by running past some of the zoo’s animals, including the rhinos and zebras.

Due to construction on the lakefront trail, they had to make last minute course modifications to the 10K, but they didn’t adjust the course mileage for this. The first mile marker was actually placed around 1.4 miles.  Each subsequent mile was just as long.  By the time I reached the Nature Boardwalk, my watch informed me I was well past the 10K distance.  Runners at the finish who tracked their mileage all seemed confused by the distance of the course.  Anyone hoping for a PR would have been disappointed.  The post-race email sent by the zoo apologized for the course adjustment and acknowledged the longer distance but made no mention of any correction to runners’ times.

At the post-race celebration, runners could enjoy DJ tunes, as well as a slice of Aurelio’s pizza and a Goose Island beer.

United Airlines awarded the first place female and first male finisher in the 5K and 10K races with a pair of round trip airline tickets.