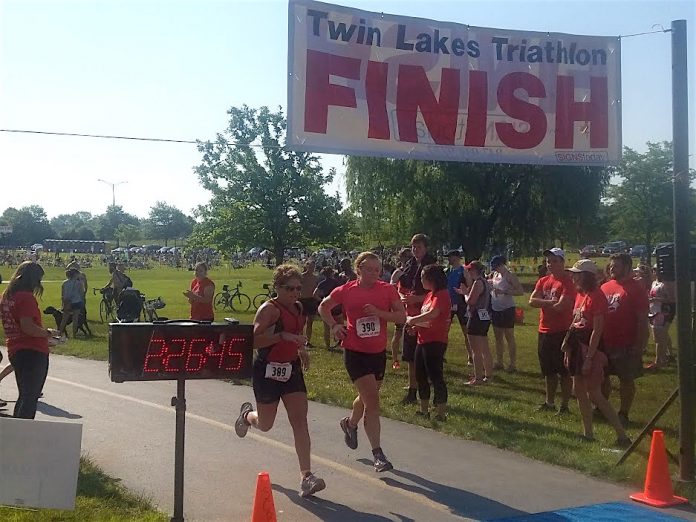 The Twin Lakes Triathlon hosted by the Salt Creek Rural Park DIstrict in Palatine, Illinois is rapidly becoming one of my favorite events of the year.

Transition officially opened at 5:15 a.m. Sunday morning and when I arrived around 5:30, the closest parking lot was almost full. The rain from the previous week had saturated the field used for transition, so setup was a bit muddy. After getting everything laid out, I got my timing chip and body marking and headed down for a quick warmup in Doughnut Lake. The water was calm and warm; I agreed with numerous participants who mentioned it was a little murkier than in previous years. One of the reasons I recommend this race to first timers is primarily because of the swim. They actually run makeshift lane lines built from orange milk cartons the entire length of the 700 meter course! It typically feels like you are in a giant swimming pool.

At 6:10, everyone was asked to exit the water for a course talk and by 6:30 the first wave was on their way. I believe the waves are created by self-estimated swim times during registration and not by age group or gender. This usually helps reduce congestion during the swim. Additionally, Twin Lakes is a rolling start where two or three swimmers enter the water every five seconds. I’m not sure if it was just me or if some people misjudged their times, because, it still seemed fairly crowded in the lake. After circling the island at the far end of the course, it is a straight 300 meters back into the sun. Polarized or mirrored goggles would be a good choice on a clear day to help reduce glare.

Getting the bike out in transition was a bit difficult due to the sloppy conditions, but, this was quickly forgotten once out onto the technical bike course. The 14-mile track is mostly flat with a few small rolling hills and a lot of tight turns to navigate. Everytime you get a bit of speed there seemed to be a sharp corner forcing you to slow down or risk running off the road; there were a few accidents due to people underestimating their line. While the route is open to traffic, there were police officers keeping athletes safe at every major intersection. Some road repairs have been made since last year making the bike segment that much more enjoyable!

Finally, the run is a fast, flat 4.5-mile loop on the roads and paved paths of the neighboring subdivison. Some of the area residents clearly make a morning of the event setting up lawn chairs in their yard to watch the race and cheer everyone on to the finish line! There is always a large crowd at the finish line who stay until the last racer has crossed. Standard recovery nutrition is provided at the end of the race, but, don’t expect a medal (unless you place in your age group). Completing this course whether you are new to triathlon or a season veteran, like 82-year-old Kirby Anderson, is reward enough!