As someone who never jumped on the Fitbit bandwagon out of complexity concern, I was slightly doubtful that I’d like the Apple Watch Nike+ when Nike invited me to test it out.

Monday night, I met with Nike employee Kennard McClellan, who gave me and another writer our watches and walked us through the set up. At first glance, I noticed how sleek the watch is; the 38mm touchscreen resembles the interface of an iPhone or iPad, which I am very familiar with. The Nike Sport Band is a flexible yet strong fluoroelastomer, and the holes allow for ventilation and sweat management, according to the product’s website. I’m a sucker for bright colors, so the neon green on the grey background caught my eye instantly.

Like any other Apple product, the setup process is long, but straightforward; we had to link the watch with our iPhones via Bluetooth, and because it’s a watch designed specifically for runners, we had to input a bunch of health information, including gender, height and weight. After agreeing to the terms and passing a few miscellaneous screens, the watch downloaded all the apps on from our phone. This part took a little while, so in the meantime, we downloaded the Apple Watch app and the Nike+ Run Club (NRC) app, to change settings including how the face of the watch looked, the different notification options for apps, and to create an account to track our runs.

Once both of our watches were set up, we met with Robyn Lalonde, a coach from NRC, and we went on a 2.5 mile run. While I already was impressed with the watch’s features, seeing it in action is what sold me on the functionality of the product.

Using the NRC app, we were able to preset the watch to take us for 2.5 miles. Then, I chose to receive reminders from Siri every mile, where she told me the overall time, pace and distance. I’ve never had any sort of immediate indication while on a run, and I think this feature is something I’ll quickly become reliant on.

My favorite part of the watch is that it automatically senses when you are stopped, at a stoplight or wherever, and pauses the run for you. You can also use Siri to “pause my run” or “stop my run” at any time. The only downfall with this feature is that your phone needs to be within range to access Siri, and while you can run without your phone (a dream come true), you have to manually pause or stop the run.

When we finished our run, the Apple Watch Nike+ congratulated us with a motivating message, along with statistics from the run; in addition to providing your overall time, average pace, distance and heart rate, the exact route is displayed across the screen using the watch’s intelligent GPS. While some may see this part as useless, I actually believe seeing your route gives any runner a little more sense of accomplishment.

Also within the NRC part of the watch is the ability to connect with friends – although I’m not big on sharing my runs or workout progress with others, I can definitely see how this would be a source of motivation for others. The watch tells you which of your friends have ran that day, and how many miles you’d have to run to catch up. For the competitive runners, this will ensure a run is never skipped!

I haven’t even had this watch for 24 hours yet, and I’m already obsessed. I’ve gone through the Apple Watch app several times, and there’s so much it can do! Aside from the awesome running features, which I will probably use the most, you can link your messages, emails, social media accounts, and basically anything you want so the watch can serve as a phone when you’re on the go. Plus, I’ve had it on my wrist since 7 a.m., and the battery is at 79 percent, nor has it killed my phone battery. 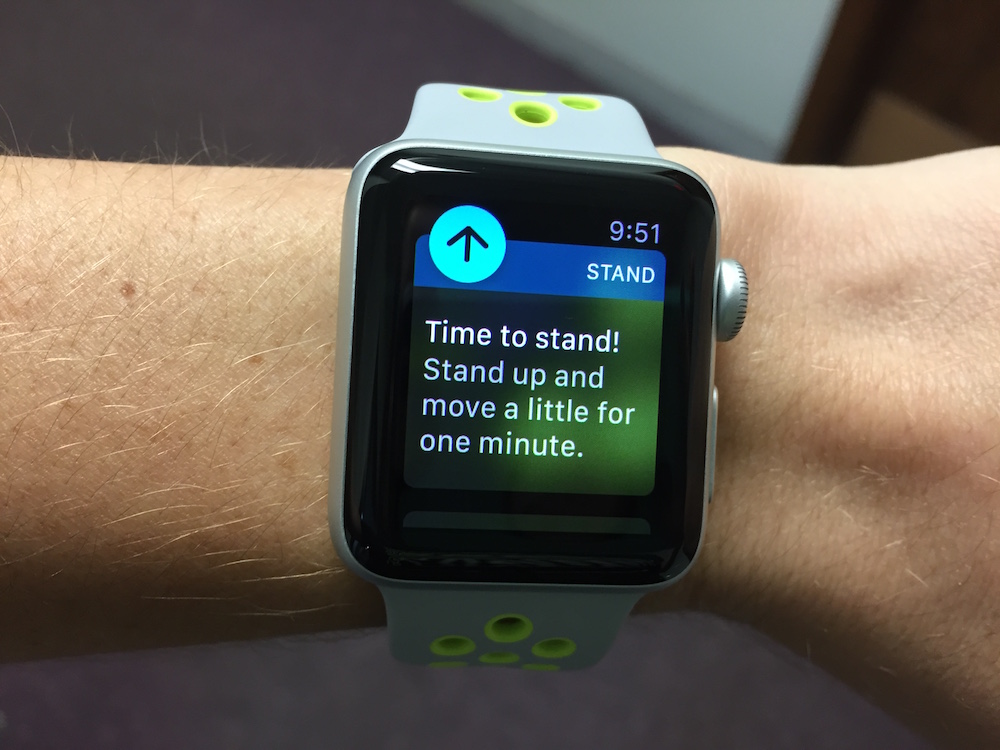 The watch also has an “activity” feature, which counts your steps, motivates you to move every hour (super beneficially for those, like me, who have a desk job), and even reminds you to take a few minutes to breathe and relax. I’ve only used these features for about six hours or so but I already feel like I am much more conscious of my daily activity, and am actually taking the suggestions and requirements seriously. Seeing the “exercise” bar so low already has me itching to get a workout in today and meet my calorie-burn goal.

Another irresistible feature of the watch is its water resistance; users can actually swim in the pool with this watch up to 50 meters deep, as long as they remember to turn the “water blocking setting” on, where it will capture all the water, and release it when done. I’m not much of a swimmer, but for training triathletes, this is essential.

The one major “con” I see in this entire product is the price of watch; had I not gotten a tutorial, I’m not sure I would ever justify spending $369 on a watch ($399 for the 42mm size). However, you pay for what you get, because this watch can truly do it all. While all the features are slightly overwhelming, I know I’ll adjust like I did when I got my first iPhone.

I can already tell that the watch’s recognition as the “perfect running partner” is beyond accurate; while my race schedule has definitely dwindled down for the season, I can now stay competitive as I challenge myself on every run using the Apple Nike Watch+.