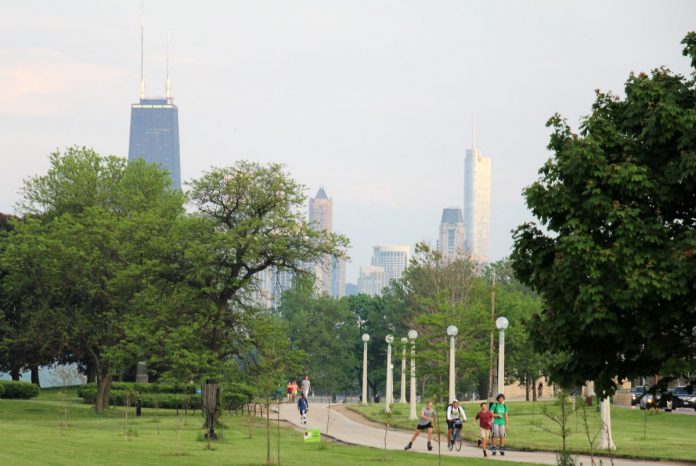 When users flock back to the Lakefront Trail this summer, they’ll find a new experience at a critical entrance that has caused problems for cyclists and pedestrians for years.

The city has reconstructed the trail and grounds at the Fullerton entrance, one of the busiest sections of the Lakefront Trail, adding nearly six acres of parkland by filling in the lakefront in a $31.5 million project funded by the U.S. Army Corps of Engineers, the City of Chicago and the Chicago Park District. The reconfiguration provides two separate trails for pedestrians and cyclists, a longtime goal of cycling advocates.

“We’d love to see that the full length of the trail, but we recognize that practically, it’s going to come in segments over time, so we prioritize the segments that are most congested, with the most conflicts,” he says.

The Lakefront Trail sees more than 30,000 people accessing the trail every day during summer months, and more than 100,000 on busy summer weekends. While the changes at Fullerton will provide a much better experience, users will still find a logjam at Navy Pier this summer as construction continues on the Navy Pier Flyover project, a $60 million project scheduled for completion in 2018.

Until then, a complicated, congested detour guides users clumsily across Illinois Street and Grand Avenue from the north side of the Chicago River to the south. When completed, the flyover will allow trail users to smoothly bypass the congestion caused at the entrance to Navy Pier, the Midwest’s most popular tourist attraction, on an elevated 16-foot wide pedestrian path for cyclists and walkers.

“The Navy Pier Flyover is huge,” Whitehead says. “That’s been a choke point that’s been known for years.”

With the Fullerton entrance now complete, and the flyover at Navy Pier progressing, Whitehead says Active Trans next hopes to see separated traffic at Ohio Street Beach and Oak Street Beach. When the Active Transportation Alliance released the 2013 Friends of the Lakefront Trail Public Engagement Report, separate spaces for walking, biking and running came in as users’ number one priority.

Mayor Rahm Emanuel announced March 22 that the city would create separate lanes for bikers and joggers from Fullerton Avenue to Ohio Street, and from 31st Street to 51st Street.

Steven Vance, an urban planner and cycling advocate who launched the blog Grid Chicago with John Greenfield in 2010, then Streetsblog Chicago in 2013, says that while these large projects have sparked enthusiasm, the city is perilously behind on routine maintenance.

“You can see how this is the case because instead of maintaining and repairing broken parts of the Lakefront Trail, the Park District paints over it with yellow paint,” he says. “And some of the yellow painted areas have been in that condition for years. They make it really easy to see how far behind they are.”

Whitehead says major change has taken place in the city’s approach to cycling and pedestrian transportation.

“Now we’re seeing political leadership that wants better biking and walking infrastructure in their wards,” he says. “It’s no longer, ‘Do we want it?’ but rather it’s leaders arguing that they want it now, faster and more of it.”

But Whitehead pointed out that improving life for non-motorized transportation users in Chicago isn’t all about high-profile infrastructure projects. Improved signage and markings could go a long way in making paths safer and easier to use, he says.

For instance, adding pavement markings to the Lakefront Trails would make way-finding easier and is often more effective than signage. Signage should have simple, specific messages at points along the trail, rather than a small-print laundry list of rules at trail entrances.

“It’s important to think about all of the different types of people who use the trail, from those using it for training to those commuting, to inexperienced cyclists on vacation,” Whitehead says.