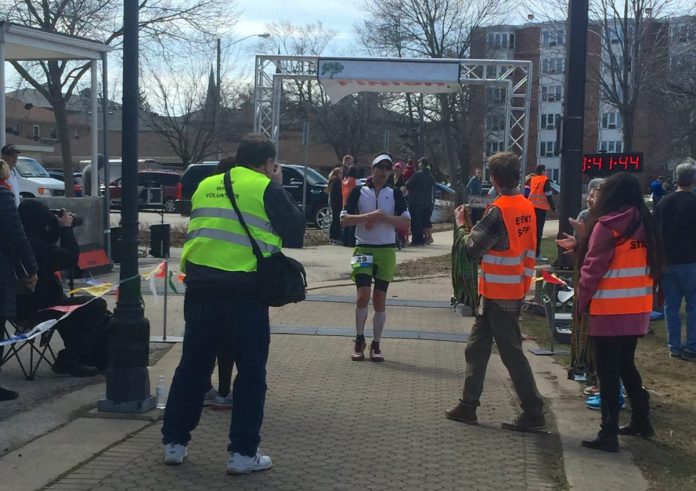 On Saturday, The Waukesha Park foundation hosted their 25th anniversary Trailbreaker Race. With distance options of a Marathon, Half Marathon, 10K and 5K, this race is truly one for every athletic ability.

Race start times were staggered throughout the morning depending on your distance of choice. Marathoners headed out first and began through the picturesque downtown area of the City of Waukesha. The streets were lined with volunteers and spectators cheering on the racers as they geared up for 26.2 miles.

After a short jaunt through the city streets, runners headed out to the Fox River Trail and Glacial Drumlin Trail, which held miles of improved trail pavement lined by trees, providing a nice shade for the runners. Both trails were clear and free of debris allowing runners to enjoy a fast and flat course before heading out to the star of the marathon route, The Ice Age Trail.

A historic landmark in Wisconsin, the Ice Age Trail is one of only 11 National Scenic Trails, and traverses some of Wisconsin’s most scenic landscapes, telling the story of the last Ice Age by highlighting Wisconsin’s unique glacial features.

Marathoners rounded out the middle of their mileage through extremely rugged trail conditions finishing at the top of the 40′ Lapham Peak Tower, the highest point in Waukesha County, with spectacular views of the surrounding lake country. Runners raced to the top of the tower to ring a bell and pose for a photograph. Several race volunteers were there to provide smiles, cheers and water. Race organizers also brought any fueling or clothing items that runners requested to this midway point.

The half marathon runners followed the same route as the marathoners but did not enter the Ice Age Trail. The half marathon route is a great one to keep in mind if you are looking for a PR. This fast, flat course is an out and back route, easy to navigate, with very little elevation.

The Waukesha Park Foundation does an amazing job producing this race each year. Communication was plentiful and timely, allowing runners time to adequately prepare. Packet pick up was available the day prior, as well as the day of and ample free parking made it easy for runners to enjoy the day with little to no stress about accommodations.

Swag included a long sleeve technical T shirt with the logo of the race as well as a 25th anniversary marking down the arm. Finish line crossers were greeted with plentiful food, water and Gatorade.

This race serves as the main fundraiser for the Waukesha Parks Foundation who has generated and re-invested over $150,000 with the Parks, Recreation and Forestry Department to “make Waukesha a better place to live, work and play”.

Just an hour north of the Stateline border, this race is one of the most unique races I have ever run. The organizers are friendly and efficient, making preparation and parking extremely easy for runners. The trail is unique and challenging while providing runners a step back into the historical Ice Age. If you have never experienced this race, I encourage you to mark your calendar for this race next spring. It’s a great way to start your running season.