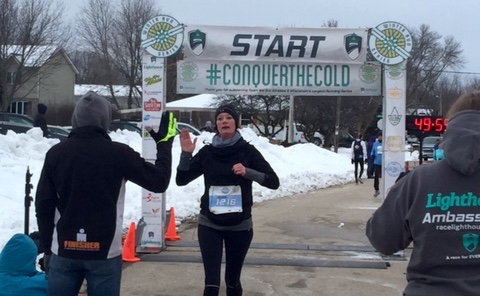 On Sunday, Lighthouse Events hosted the fourth race out of six in their Winter Race Series. Adequately titled The Big Chill, the morning temperature was in the mid-20s with a light snow falling as the race began.

The race offered a 5K or 10K distance option with the 10K starting prior to the 5K, ensuring that racers had more than enough space on the course. The race looped through neighborhoods in the town of Hartford, Wis. 5K racers completed the loop once, while 10-ers looped twice to pass the finish line. The all asphalt road race was a fast course that would have been ideal for a PR.

There were several mild hills throughout the course that the race director gave fair warning about in an advance email. Participants raced past an elementary school, high school and several homes. This course can only be described as a comforting, home-style race. There is nothing like running through a neighborhood with the smell of a home cooked breakfast pushing you through to the finish.

Parking was free and abundant with race volunteers guiding cars into the parking lot just outside the race registration area and start line. Volunteers were stationed throughout the course offering water and smiles as runners past.

As with all Lighthouse events, all racers received a high-five at the end of the race and award medals were given for first through 10th place. Swag included a fluorescent yellow technical knit T-shirt and a race bib that provides discounts to several local businesses.

There is still time to get involved in the winter race series. Lighthouse is hosting two more races in the months of February and March. In just two short weeks on Sunday, Feb. 12, The Cupid Shuffle will provide a 5K and 10K option and will take place in Brookfield, Wis.

You can register for their next race and check out the rest of their upcoming races at their website, http://www.racelighthouse.com/.