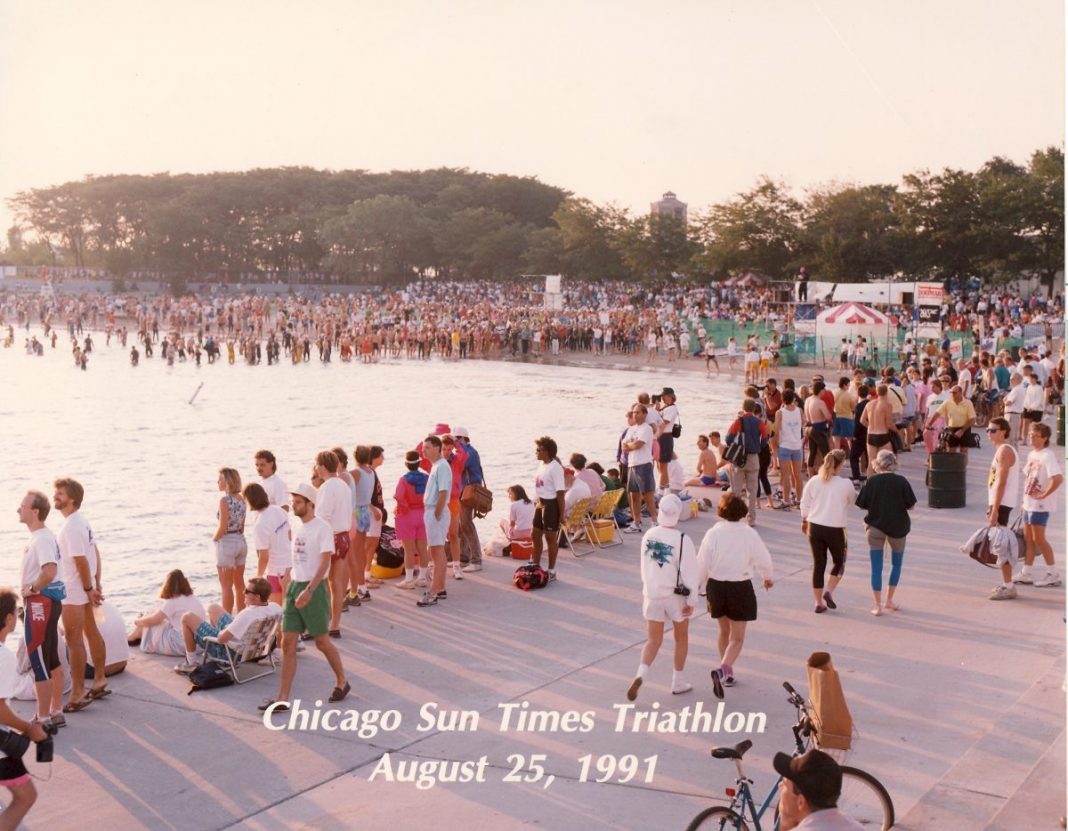 While you’re swimming in Lake Michigan and riding along Lake Shore Drive at this year’s Transamerica Chicago Triathlon, you may ask yourself, how did this all start?

Well, it almost didn’t. In early 1982, Jan Caille and a group of his friends had the idea to bring a triathlon to Chicago, but they hit some bumps along the way.

Let’s start from the beginning: Caille, who grew up in Chicago, was a triathlete himself, and when he broke his leg in 1982, he was frustrated but still wanted to be involved. So, bringing the sport to his city was his answer.

Coincidentally, the United States Triathlon Series was also looking at Chicago for its fifth series location at the same time. A USTS production manager called Caille, the two agreed on a partnership, and it would be smooth swimming from there … or so they thought.

Because Caille was well-connected with various companies throughout Chicago through his job at an advertising agency, he was able to quickly get in contact with the mayor, who, at the time was Jane Byrne. Byrne was all for the race, and after meeting with the Chicago Park District for course approvals, Caille and his team were on their way.

Then, the mayoral election of 1983 came along, and the waves rippled. Byrne lost to Harold Washington, who Caille had no relationship with, and although all permits were in place, with 500 registered for the race in 30 days, it was cancelled.

Luckily, unhappy registered athlete Stewart Weltman saved the day, and used his connections at the Chicago Park District to help set up several meetings with the Mayor’s Office of Special Events.

“About 10 days before the race, we connected with a woman who basically was the head of the office,” Caille says. “She was interested yet unknowledgeable, but she and her daughter were track athletes, and thought if running and the lakefront was involved, she’d approve it.”

Although official permits weren’t granted until the day before the race, the first annual USTS Chicago Triathlon was held on August 7, 1983, and had 760 participants.

From the Start Line

Professional USTS triathlete from San Diego Scott Tinley was ecstatic about the opportunity to race a triathlon in a major metropolitan area, which was basically the first of its kind.

“All other metro triathlons were 15 to 20 miles away from the downtown areas, so to have an event smack dab in the middle of a highly populated area, and running and riding on Lake Shore Drive, was awesome,” Tinley says.

Tinley, 25 at the time, ended up winning the race with a time of 2:20:30, and returned the following three years. His favorite part of the race was the swim, because as a triathlete from California, it was a totally different experience.

“I was used to doing my thing on Mission Bay in San Diego, but then in Chicago, you look up and see the Sears Tower,” Tinley adds. “It was not a culture shock, but an awakening of potentials in the sport, and I felt legit.”

For a first-year race, Tinley was impressed with the level of media attention and professionalism; after crossing the finish line, he was being interviewed by reporters from the Chicago Tribune, Chicago Sun-Times and the Mayor’s Office, and made him feel like a real professional athlete.

The female winner of the first race was Julie Ann Olson from Minneapolis, and both Olson and Tinley were awarded $1,000.

While the first Chicago Triathlon was definitely a memorable one, the race has grown and evolved throughout the decades to what it is today. In fact, in 2007, it was recognized as the “World’s Largest Triathlon” with over 8,000 participants, and the record participation was in 2009 with 9,299 athletes.

In 35 years, changes are inevitable, and the name of the race was frequently being adjusted; after the first year, Bud Light became the first company to host the event, and immediately participation was doubled. It remained a part of the USTS until 1987, when it joined the Tri-America Series.

In 1988, the Chicago Sun-Times became the title sponsor, and in 1992, the race was an Ironman qualifier and part of the Ironman ProTour series. Then, in 1994, Mrs. T’s Pierogis took over and was the title sponsor for the next eight years.

In 2003, when Accenture became the sponsor, registration for the Chicago Triathlon closed earlier than ever, and this happened again in 2005. By then, the race capacity was 7,500. Accenture also introduced Interactive Messaging Services to provide real-time race updates to racer’s loved ones via land lines, and live webcam views of the finish line. Elite Age Group Competition Divisions were brought to the Accenture Chicago Triathlon in 2005.

The Chicago Triathlon joined the Life Time Fitness Series in 2006, and 2008 was the race’s last year under Accenture, when an elite field of Beijing Olympians competed because Chicago was a finalist for the 2016 Summer Olympics.

In 2010, Life Time Fitness acquired the race from CAPRI events, and in 2012 it was renamed the Life Time Tri Chicago. Finally, in 2014, Transamerica took over and remains its title sponsor today.

After Life Time bought the event, Caille stayed on board for another three years, having seen the evolution of the race for 30 years.

“It was an amazing experience and I’m incredibly grateful to Chicago and to the people I worked with,” he says. “When you think of how many people’s lives it has affected and changed over 30 years, it’s amazing.”

Course changes were also a common theme in the early years of the race; the original swim went between the Adler Planetarium and the Shedd Aquarium, which is also where the transition was located. In 1991, the aquarium added its whale exhibit, which forced the transition to move to Grand Avenue. Then, due to construction, it was moved again to a parking lot near Navy Pier, and now it is along the Lake Front Path.

“We shuffled around downtown Chicago a lot … one year, we didn’t have a place to do the swim, but someone suggested Monroe Harbor,” Caille recalls. “So, all the boats have to be moved so the area can be cleaned for the swim start and finish, and the harbor people are inconvenienced, but they’ve always been supportive and cooperative.”

Problems and construction with Lakeshore Drive also resulted in some course adjustments, along with changing start times to ensure the road was cleared by 1 p.m.

“This city continues to embrace the multisport lifestyle, and we attribute the continued success of the Chicago Triathlon to three things: the history of this event, the city’s lakefront as a training venue (especially Ohio St Beach), and the reinvented course experience (back in 2014),” Scott Hutmacher says, current Brand Manager of Life Time Tri.

Despite all the changes, seven-time winner Michellie Jones says the race has always had the same vibe.

“I haven’t raced in a while, but it’s still one of my favorite races,” Jones says. “You never know what you’re going to get; they call it the Windy City for a reason, because you never know what the water and the weather will be like. On paper it looks like it’s not a bad course, but it is quite challenging with the environmental factors.”

Jones is originally from Australia, and came to the United States in 1991, when she competed, and started her winning streak at the Chicago Triathlon.

“The course just suited my style of racing, and I always thought it was this really cool race,” Jones adds. “Being able to hold a triathlon with so many athletes in such a big city is unbelievable.”

Hutmacher’s history with the Chicago Triathlon actually began in 2002, when he raced the event with his brother.

“I vividly remember marching down the start chute with 100 other strangers. Lake Michigan sat in front of us, the Chicago skyline behinds us, and thousands of spectators surrounded us,” he reflects. “That was one of the most stunning, yet most terrifying moments in my life.”

Now, Hutmacher revels in the history and camaraderie of the event each year.

“On Race Day, I always make it a point to spend time at the swim start. I love to interact with our athletes, especially the first-timers – acknowledging those same fears, reinforcing their readiness and celebrating what’s soon to come,” Hutmacher adds.

“There’s nothing like watching someone literally jump into the abyss, work through an epic challenge, then come out a better person on the other end.”