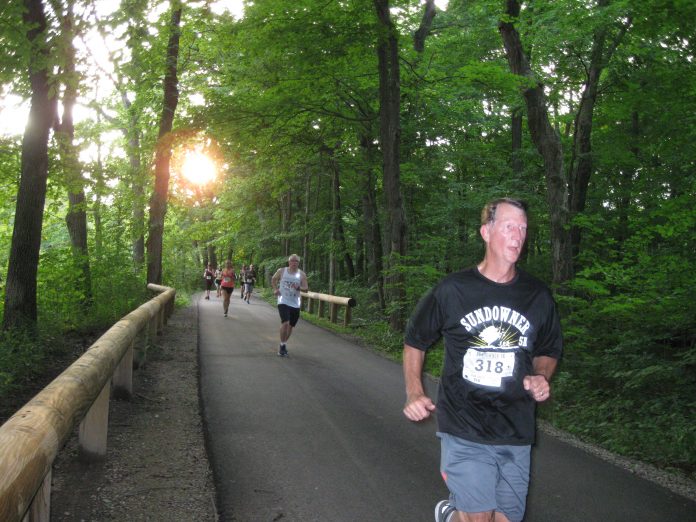 It wouldn’t be the Sundowner 5k if it wasn’t a hot and humid day and this year’s Thursday night race in Joliet kicked off what might be the hottest weekend in Chicagoland in a few years.

The Joliet Park District is used to organizing this race in these conditions and kept runners fully informed and prepared beforehand so that everyone remained safe but still had a good time. They sent out several reminders during the day to keep hydrated,  and made several course adjustments to accommodate the heat; the JPD set up a misting inflatable near the start/ finish line, add a second aid station, put a misting hose just after mile two, add a cooling van on the course, and the Joliet Fire Department was on site, as always, with their hose spraying water for anyone that needed to cool off at the finish line. This event is so well organized in this regard and that is why, despite the not always pleasant conditions for running, people have been coming back to this race for twenty years.

It could also be because of the post-race picnic.

After tackling the semi-hilly but well shaded course, runners took a minute to relax and enjoy a post run beer and feast which included a hamburger, hot dog, or chicken wrap from Buffalo Wild Wings, chips, cookies, and frozen yogurt from TCBY. As they ate under the big tent, the awards ceremony called out all the age group winners, which this year’s awards being running belts. (I’d like to add that the belts they gave out actually had a compartment that was big enough to store your phone, something most running belts don’t have.)

The Sundowner 5k is a challenge, for sure, but it is a challenge that lends itself to a lot of smiles and a great feeling of accomplishment for all the participants. Here’s to another 20 years of running in Joliet in the summer!