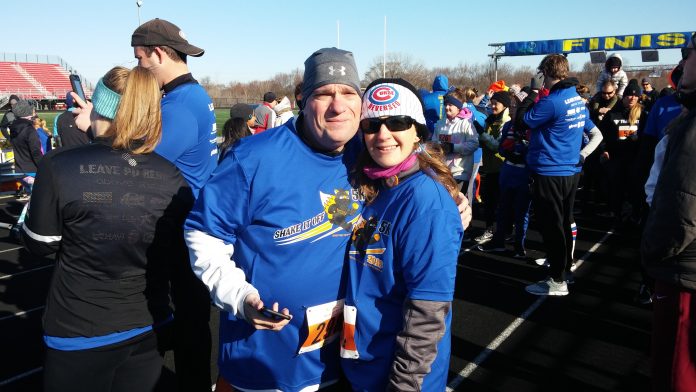 One hundred percent of the proceeds from the Shake It Off 5K Run/Walk and 1 Mile Community Walk go to the Michael J. Fox Foundation for Parkinson’s Research.  Bolingbrook resident, Jimmy Choi, who started and continues to organize this event, is an American Ninja Warrior and has Parkinson’s Disease.  You can see Choi’s experience at https://youtu.be/rAO01BNEJkk  Choi will be attempting this again this year!

In its fourth year, the Shake it Off 5K had over 750 registered onsite participants and hundreds of virtual participants.  Choi said that 64 people with Parkinson’s participated in the event.  This race keeps growing because of Jimmy and his wife, Cherryl’s enthusiasm and organization.  It’s only limitation seems to be the crazy weather Bolingbrook has in early April!!

Packet pickup was easy at the Road Runner’s store in Naperville or onsite on race morning.  This year’s shirt is a nice color blue and has a Ninja fox logo.   Parking in the Bolingbrook High School stadium lot was also easy.  Suburban races are the best as parking is almost always easy and free.

Like other years, this year’s race was a cold one — 25 degrees at the start feels a lot colder in April than it does in January.  Yet, the sun was out and smiles were seen all around.  About 20 minutes before race time, participants were asked to move to the starting line for some motivational words from both Choi and people from the Michael J. Fox Foundation.  This was the only disappointing part of the race as the sound was distorted and we couldn’t understand what they were saying.  Then the National Anthem was sung beautifully and the race started.

The course starts with a downhill run out of the stadium to the street, where a sharp turn to the right put us on a street where a fairly wide lane was marked off with cones. The course ran on streets for approximately the first mile and a half, and then turned onto a paved bike path.  The last quarter mile was back on the coned-off street. Throughout the course there were volunteers at every turn and the police were carefully monitoring all the intersections.  There was one aid station with both water and Gatorade.

Each runner was awarded a nice, large medal with the Ninja fox logo and age group winners were awarded unique hand painted fox mugs.  The post-race party included Andy’s custard, cookies, bananas and coconut water.  And, new this year, keeping with the Ninja theme was an obstacle course that everyone with a 5K bib was given a chance to complete.   I didn’t stick around to watch the awards or the obstacle course as I was just too dang cold!

This race is an annual “must do” as it is for a great cause and because it is so very well organized. Top male and female finishers were Tyler Saunders; 17:29 and Alyssa Hall; 21:40.