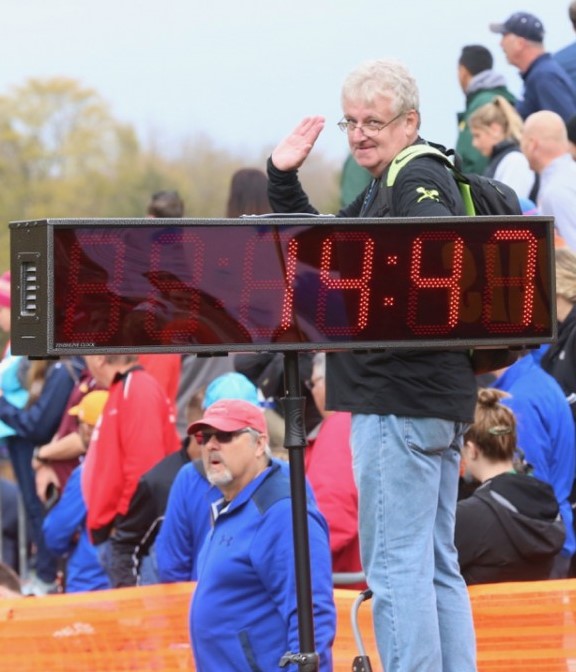 Michael Newman is Founder and Editor of Illinois Cross Country Track and Field (ILXCTF.com), and the National Director of DyeStat TFX. You may recognize him as the guy with the video camera at high school track and cross country meets around the state. Learn about how his passion for the sports turned into a full time job.

Yes, my passion came for the sport in high school. I ran at York under Mr. Newton, and I learned so much from him. Then I ran at North Central College where I learned more about the sport there and fell in love.

I was in management for 25 years, then got divorced and knew I needed to make a change. So I started at Illinois Top Times while living in Ohio in 2008, and Bob Geiger asked me to write a few articles and keep track of stats. DyeStat became part of ESPN but then ESPN dropped it and I was out of a job. DyeStat then went into Runner Space where I work now and I’m the National Director for high school results. Then I made my own website to cover the Illinois sports, and have had ILXCTF.com for three years. I get paid to go to track and cross country meets; it’s truly my dream job.

I have meets that I love the hosts and we have a good relationship so I go to those. I try to get all over the state as much as I can, but it’s a matter of getting to the big meets. I learned a few years ago with jumper Ja’Mari Ward; he was jumping in small county meets and people thought I was crazy driving far to see him, but I had a hunch he was going to do something special. He set the national record in triple jump and I got it on video. Now, Katelynne Hart is a once in a lifetime runner, so I want to see her as much as possible.

I obviously go to the big sectionals and state meets. It may change in a couple years based on who’s where, but it’s about getting a good story. There was a guy who ran under 21 seconds in the 200 at Downers Grove South, and it was freezing out, but worth it.

I do preview articles for the big meets so people know who will be there. When I was first starting out, I didn’t know what kind of impact I had, but I was at the cross country state meet in Peoria and two kids came up to me thanking me for the preview article because that’s the reason they were there.

At the meets, I do videos and interviews both on and off camera. For the track state meet, I can’t do video, but I do a lot of interviews. I usually pick about 10 people I have to talk to, and every other interview is just gravy. I can video at the state cross country meet so I run around the course six times, and I’m exhausted after, but the footage is awesome.

With the videos, I do it basically by myself. I have a good friend, Laura Duffy, who has a daughter that runs at Downers Grove South, and she takes great pictures for DyeStat. She gets unbelievable shots; she’s my rock and we’re a team. The most help I get though is from the coaches in the state. We’re a big team.

The passion that you see in these kids, it’s wonderful to watch. You see the good moments and the bad moments, but seeing kids race when they’re a freshman and see how they develop through four years. Or interviewing someone for the first time as a sophomore and it’s awkward, but as a senior they’ve grown mentally and physiologically. It’s fun to go to a meet and be in the atmosphere, especially during cross country. Illinois is the craziest cross country state in the nation; people say California or Texas is big, but at Detweiller Park, it’s a six-hour meet but with 15,000 people running all over. It’s crazy.

The site isn’t about me it’s about the kids that are running. Every time I interview it’s about them. I learned so much when I was running in high school and college and a little professionally, but I’m just giving back. When I was running in high school the newspaper coverage of the events were great. It was so fun to look for your name in the articles after meets. They don’t have the newspaper coverage anymore, so I’m providing a service that way. Kids love seeing their name and I think that’s great. It’s a blessing.