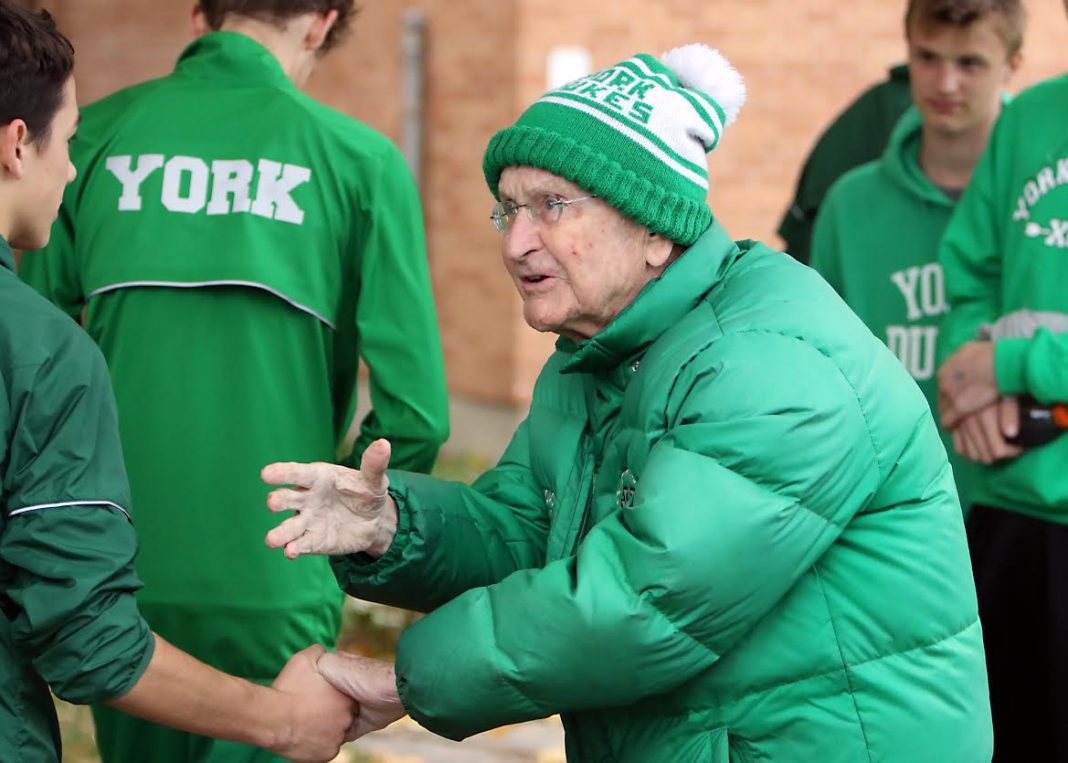 Editor’s Note: This story was originally published in January 2017. On Dec. 9, 2017, Joe Newton passed away in his home in Arizona. He was 88 years old. Chicago Athlete wanted to resurface this article in honor of the impact Newton made on the local running community. Read how he felt about his career upon retirement last winter:

Q: How did you first get started with cross country?

A: In my running career, I was a sprinter. I never ran anything more than a quarter mile, and when I was a head basketball and track coach in the Army I started to learn about distance running. I never ran a distance race in my life, but I feel very confident now because I had knowledgeable coaches and mentors who helped me.

Q: Who was your biggest help in teaching you about the sport?

A: Dr. Joe Vigil, who was the coach at Adams State University and helped them win 20 national championships. We became real close friends; I picked his brain and used so much of his stuff which was obviously good stuff because it won for both of us.

Q: How did your career at York High School begin?

A: In 1956, I got hired as a PE teacher and the assistant men’s track coach. In 1958, I became the head track coach, and in 1960 I took over cross country as head coach. It’s ironic because I went to Parker High School on the South Side of Chicago, and the school colors were Kelly green and white just like York. It was meant to be.

Now in 2016, I’m done; it was a long career but a great career – I could hardly wait to get to school every day and I’m lucky because most people hate their job, but mine energized me. I’d get to practice and see them improve and it kept me going. I don’t regret one single day.

Q: What led to your decision to retire?

A: I am getting old, and it’s hard for me to walk. I never sat down for 30 years, and I’d jump up to call the times and cheer for the runners. But, the last few years I always had to have my chair to sit on, which was honestly kind of embarrassing to be sitting while everyone else is running. Age caught up with me and I thought it was time to get out of there because I physically couldn’t do what I had to do anymore.

Q: What about Charlie Kern, who’s taking over as head coach?

A: He was a great runner at Kentucky, and he’s been at York for 15 years as my assistant and I’m confident he will definitely carry on the program well. He knows how to treat the kids and what to do because he’s been doing it with me. The future for York is very bright.

Q: In your opinion, what’s the best part about coaching?

A: Being around the kids every single day and seeing them grow as men and runners. I loved to go to school, I looked forward to it every day. Seeing them work their butts off and get better just kept me going, and earning 45 State Championships in 55 years makes you feel pretty damn good too.

A: When we won the State Championship in 1999 and Donald Sage was the IHSA individual state champion. Sage was the best runner I ever had and a great human being, and he went on and had a great collegiate career. Next to Sage was Fred Logan, who was my first great runner ad really made it all happen when I first started. Logan and Sage started the trend of one good thing after another, and made me never want to leave.

We also had Sebastian Coe, the greatest distance runner ever, living in our house in 1984 before the Los Angeles Olympics. He’d come to practice for the afternoon workouts with the boys, and he was a thrill to have him in the house. What an experience to have the only guy in history to win the 1500 in back-to-back Olympics training near you.

Q: What will you miss the most?

A: I’ll miss being around the boys and going to school every day – seeing the improvement and teaching them that if they work hard, they can be good. And seeing them work hard and get good times is a wonderful thing. When kids are young and they love the program, its match made in heaven. If the kids know you love them, they’ll do unbelievable things.

The people at York were so great to me too, and I’ll miss them all. We actually had a reunion party at York about a month ago, and 3,000 boys came back, boys from 50 years ago, including Sage, who’s now married with kids! It was a wonderful weekend, and hearing their stories made me realize that I am really going to miss the day-to-day contact with the boys.

A: I’m permanently living in Arizona with my wife. We’ve been married 64 years and are very happy with our lives. She’s been performing in musicals since high school, and she still does.  My hobby is reading books about famous people, never fiction. So instead of coaching, I’m reading all the time, and I just started a new book.

Q: Since you’re a coaching legend, what advice would you give to other cross country coaches?

A: My advice is the secret of coaching is not about the workouts, it’s about the personalities. I can’t say enough that you have to let the boys know you love them and care about them, and they will return that with performing well. It’s been a great life, but all good things come to an end, and it’s fun to look back.

Want to know more about Newton? Watch the documentary made on Newton and his team, The Long Green Line.