Home Features Running Back in Time: The History of Chicago’s Athletic Specialty Stores 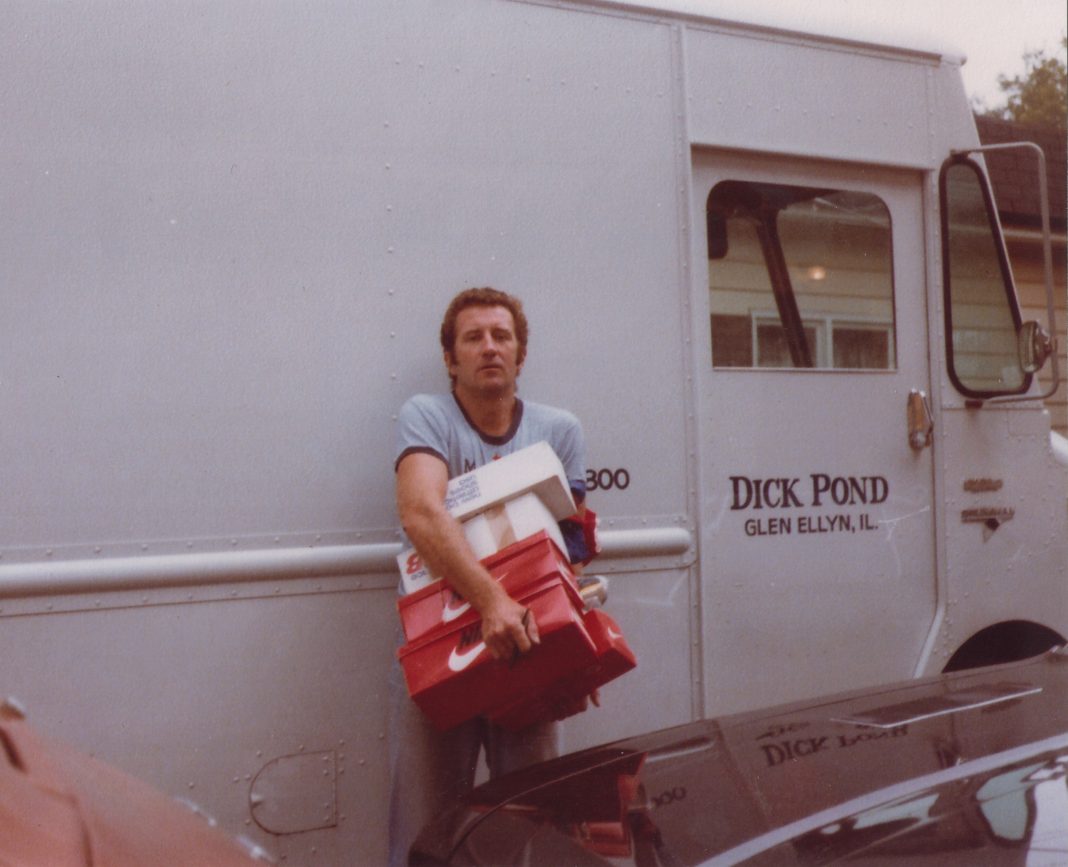 As members of Chicagoland’s running community, it’s important to recognize the abundance of retail treasures athletes have scattered throughout the area; however, many might not be aware of the stores’ intriguing, decades-long pasts—pasts that depict the ups and downs, persistence and perseverance, and sheer heart and passion of small business owners.

To celebrate such an integral part of Chicagoland’s running community, Chicago Athlete Magazine decided to interview the owners of five of the area’s oldest retailers. By connecting the dots between the past and the present, the community as a whole can have a better understanding of where we are now, as avid runners in one of the nation’s most ideal running locations, as we prepare for the future of running in the Windy City.

Although the concept of athletic shoe stores is no longer viewed as unusual (in fact, it has steadily gained popularity in recent years—to the point in which they can be found throughout the United States now), that certainly wasn’t the case in the 1970s.

In fact, when Tim Eggert opened his first The Competitive Foot store in Western Springs back in 1974, he was viewed as a pioneer. At the time, no one else in Illinois had ever opened a store dedicated entirely to athletic shoes. But the concept surprisingly caught the attention of Chicagoland runners who preferred Tim’s personalized customer service, rather than the shopping experiences they had at large retailers.

So, three years later, Tim opened a second location in Oak Park, which offered him an opportunity to combine his love of sports (he was involved in running, baseball, basketball and hockey in school) with his career. This combination proved to be highly successful—for more than 30 years, Illinois runners not only purchased their shoes and workout gear from both stores, they also met other passionate runners, ultimately forming friendships, business networks and local running clubs.

Without question, the small town feel provided a more personal touch than larger retailers could offer. The stores not only served community members as businesses; they were also members of the communities of Western Springs and Oak Park themselves. By offering camaraderie, top-notch customer service and an undeniable passion for the sport, The Competitive Foot proved that people who walk through stores’ doors are not only customers. They can also become friends.

Forty years after opening his first store, Tim (along with his wife Tyna) decided to close the Oak Park location—about a year after they had closed the original Western Springs location—and retire full-time.

“A lot of people wish we would [have stuck] around. [But], as I neared the senior citizen age, it’s something I needed to do,” Eggert says. “I want to thank all the customers. It [was] a long time, but a good time.”

Nearly one year after Richard Vertel closed his iconic Vertel’s retail store in Evanston, Mike and Carleen Murphy opened their own athletic shoe store—Murphy’s Fit. Anyone who knew Mike and Carleen well was not overly surprised by their decision to fill the gap left by the icon’s closure. After all, the couple first met at Vertel’s as employees; Carleen was hired in 1978, while Mike was hired in 1979.

Murphy’s Fit has become an icon in its own right since 1980, as customers from around the country remain loyal to the store and chose to only purchase their gear when they visit Evanston.

“We are most proud of surviving in the era of online shopping,” says Carleen Murphy. “While it’s no doubt convenient to shop online from home, you can’t be fitted like you can at Murphy’s Fit, which is why many orthopedic surgeons, podiatrists and rehab centers send their clients to us for expert help in footwear.”

Aside from its personalized service, Murphy’s Fit has also become well-known for its involvement in the community, as the Murphys have trained many managers and salespeople who currently work in Chicago’s New Balance stores; at one point, Murphy’s Fit was the Midwest’s largest supplier of New Balance shoes, pre-Internet age. The store is also a sponsor of the Ricky Byrdsong Memorial Race Against Hate (held through the YWCA), as well as a t-shirt supplier for the “Have Dreams” (an autism resource organization) team in the Chicago Marathon.

“In addition to volunteering, one of our greatest rewards is seeing people overcome foot-related issues through our guidance,” Murphy stresses. “So many people have found foot and leg comfort in the shoes we’ve guided them into—and will continue to do so.

Personifying the meaning of trailblazer in every sense of the word, Dick Pond began to sell shoes out of his garage long before the term “Running Specialty Store” even existed. An All-American runner at Western Michigan University, Dick eventually sold shoes (some of the first ever manufactured by companies like Nike and Adidas) at high school meets and shipped them to coaches and athletes throughout the United States. As his shipments increased, he soon became renowned for offering exceptional customer service and high-quality products at prices that nearly everyone could afford.

Nineteen years after he first began to sell shoes out of his Glen Ellyn home, Dick opened his first retail store in Carol Stream in 1988, as the demand for “America’s Oldest Running Shoe Store” had increased to the point in which an actual retail location was necessary. Although Dick tragically lost his battle to leukemia three years later, his legacy continues. Today, his family oversees four other locations—Hoffman Estates, Lisle, Park Ridge and St. Charles—along with five traveling shoemobiles and a mail order and online business that serves high schools and colleges across the country.

“Our roots are in track and cross country, and that still remains the case,” says Nick Hurley, manager of Dick Pond Athletics Hoffman. “Just like Dick did, we take shoes directly to high school athletes.”

He adds, “We are also proud of our team bucks program that rewards teams—with five percent of purchases being donated back to that program. In 2017, we gave back $61,000 to schools around the country.”

In addition to the team bucks program, Dick Pond Athletics offers a Walk2Run program that helps beginners get into shape and complete their first 5Ks, as well as a variety of running and training groups for people of all ages and skill levels.

“Just as in 1969, our core goals and values remain the same: providing the best products and service to our customers while also being an integral part of our communities,” Hurley continues. “We are grateful to all our customers and employees that have allowed us to be in business for almost 50 years—and are eager to see what will happen over the next 50 years.”

When Tom Cooney first began to run competitively in 1962, he was only able to purchase running shoes from neighborhood sports stores, which carried a little bit of everything—golf clubs, tennis rackets, sweats and so forth.

Although the running boom had yet to begin, Tom first learned about specially designed running shoes shortly thereafter, as he saw ads for New Balance shoes that could be purchased via mail order. He then learned about Adidas, Puma and Onitsuka Tigers, a company that eventually became known as Asics.

Simply put, the challenge to purchase good running shoes was undeniable during Tom’s first few years as a competitive runner. But this challenge motivated him—to the point in which he couldn’t deny an opportunity to open his own retail shoe store when the chance arose more than 20 years later.

After assisting with the organization of the first annual Chicago Triathlon in 1982, Tom became close to Lee Borden, who opened his first Complete Athlete specialty retail store in Evanston in 1983, followed by a second store in Chicago soon after. As business continued to increase, Lee decided to open yet another store and provide Tom the opportunity to own it as a franchisee.

The store, which Tom purchased through his own company, Lakeshore Athletic Services, was open in Rogers Park from 1984 to 1986, a short, yet sweet run (particularly for Lakeshore Athletic Services) that ended far sooner than anyone expected. The primary reason? Lee Borden lost his battle to cancer one year after opening his first store in Evanston.

“All three stores were closed by 1986,” Cooney says. “But the experiences learned with Complete Athlete were instrumental in the growth of Lakeshore Athletic Services, primarily in the event management business.”

As Lakeshore Athletic Services continues to thrive, Cooney has witnessed the evolution of local shoe retailers in Chicagoland, from Dick Pond’s mobile running store to the dominance of the Fleet Feet Sports chain.

“Although the retail market is changing virtually every day, with companies like Amazon becoming more and more popular, some of the aspects of the early days will remain popular—high-quality products, a wide variety and personalized customer service,” he adds.

Fleet Feet Sports: A Store for Everyone

As Dave Zimmer prepared to compete in triathlons in the mid-1990s, he sought every advantage he could find to perform to the best of his abilities. Knowing just how competitive and focused he was, Dave’s wife, Lisa, decided to buy him the Heart Rate Monitor Guidebook, which was written by Sally Edwards, one of Fleet Feet Sports’ founders.

“We had low expectations at first. But business quickly increased,” Zimmer, owner and CEO of Fleet Feet Sports Chicagoland, says. “About nine months after we opened, I asked Lisa to assist me with the store full-time.”

“The stores can’t be one size fits all. They need to reflect the community they are in,” Zimmer explains.

To continue to increase business and attract community members throughout Chicagoland, each Fleet Feet Sports location has begun to offer a Fit ID system, a 3-D scanning system for the stores’ fitting processes. The system measures exactly what is occurring with customers’ feet and then emails all of the data to them, thereby ensuring they can have a proper fit and ultimately achieve their fitness goals.

“The possibilities of the technology are phenomenal as it continues to progress,” Zimmer says. “It’s been amazing to be on the leading edge of that.”

As Zimmer prepares for the future, he is not only excited about the potential for more stores, he is also inspired by the impact running is having on the world, as a quarter of a billion dollars is annually given to charities, via running, now. Not to mention, the sport is changing people on a personal level—physically, mentally and socially, leading them to achieve more than they ever thought possible.

“We want to continue to bring people to the sport and help them change their lives for the better, all while having fun as they run,” Zimmer states. “The passion of the running community is undeniable. It is a part of who I am—and it always will be.”