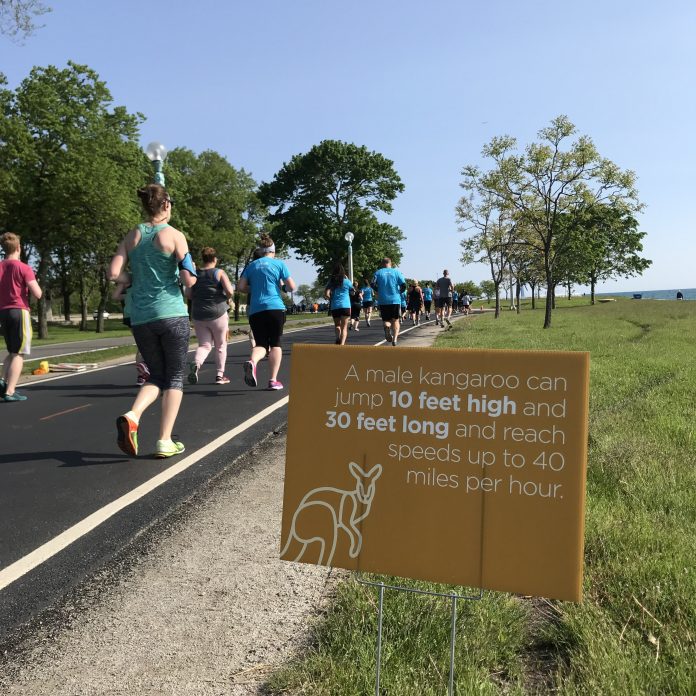 Sunday welcomed the 41st Annual Run for the Zoo & Safari Stampede. This spring race in the heart of Lincoln Park combines the beauty of Chicago’s famous lakefront path with the fun of running past wild animals. For the children, there is an obstacle course race on the zoo grounds, so everyone in the family can walk home a winner.

Approximately 4,000 runners participated, making this little neighborhood race not so little. There are pace corrals plus multiple waves to manage runners’ experience at the starting line, however these are all on the honor system. If you’re fast and competitive, better get to the front to avoid getting caught in a traffic jam of weekend warriors & strollers (strollers are allowed on the 5k course). Did I mention this is a neighborhood race? No pressure running a friendly 5-10k with average folks. Let the competitive runners enjoy that first wave.

Despite the easy breezy character of the race, both the 5k & 10k courses are chip timed, and courses are USATF-certified. All is well-prepared & protected by city officials- police at key intersections, cars cleared from streets, even a large garbage can sitting on a pothole. Volunteers were placed along the route cheering and keeping runners on path, and there were three water stations for the 10k, one for the 5k path.

The race began in front of the zoo’s main Stockton entrance, meandered uphill past the Farm in the Zoo, then headed off to the lakefront for beautiful Lake Michigan views peppered with informative signs about wild animals’ running speeds. The route returned inland through Lincoln Park, where runners were entertained by signs typically found on Marathon courses. And, of course, the final half mile gives runners the joy of watching camels, zebra, and apes munching on their breakfasts, fueling that final push toward the finish line.

For those on the competitive side, there ARE prizes to be won! Congrats to Abigail Nadler Matthew Blum (5k), Maria Lindberg & Kevin Havel (10k). First place male and female runners for each course won a pair of United Airlines round-trip economy class domestic tickets. The next winner is 41st Place and then 151st place, for the age of the race & Zoo, respectively. Teams can also compete for prizes such as Fastest Team or Biggest Fundraiser.

Run for the Zoo is a great way to kick off the running season in Chicago, begin a sunny Sunday morning, and raise money for the animals. These past few years have seen multiple million-dollar upgrades to habitats increasing quality of life for its residents.

Lincoln Park Zoo is free to the public and open 365 days a year. Race registration fees make all of this possible. This year, the zoo added a fundraising incentive: raise/donate at least $25 to be awarded with a medal. Where else do you get your race medal before running? And a cheering squad literally roaring for you as you run past?