The Wisconsin Half Marathon and 5K provides a great opportunity for Chicagoans to hop across the border for a uniquely-Wisconsin race experience and explore a different section of Lake Michigan shoreline than the 18-mile stretch of the lakefront path most Chicago-area runners have grown accustomed to.

The race was created to fill the void for a quality, spring-time long-distance running event in to serve the Chicago and Milwaukee areas and emphasize the simple joy of running with a fun-filled atmosphere and minimize the stress of competition.  How do they achieve this goal?  By focusing on that Wisconsin staple—the cheese.  While 2021 did not include the traditional “ALL CHEESE Corral,” where participants wearing cheese-themed apparel all begin the race together, there were still plenty of “cheesy” elements to be found on race day including signage with cheese references, like “Just Fondue It;” runners dressed as dairy cows; and an individual serving of cheese in the post-race refreshments. 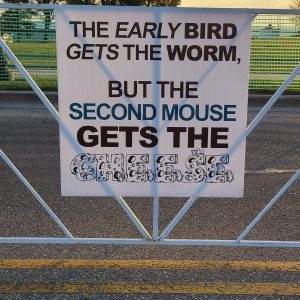 In previous years, the event included a full marathon, half marathon and 5K, but was scaled down for 2021 to include only the half marathon and 5K distances.  While the actual 26.2-distance was not a part of the 2021 event, the half marathon course for 2021 was redesigned and included portions that were only part of the full marathon in prior years.  The race began and finished right next to Lake Michigan in front of Kenosha’s Public and Civil War Museums.   Runners were treated to beautiful views of Lake Michigan while traveling through residential neighborhoods, parks and downtown Kenosha on a mostly flat course, with a few small rolling hills in the final 5K just to keep runners on their toes!  On the new half marathon course, athletes also traversed a 1.5-mile stretch of gravel on the southern end of the course—an added challenge previously only experienced by those running 26.2 miles.

New safety measures in light of the Pandemic included start clusters of 60 people beginning every 3 minutes; mask requirements in the start corral and at the race site (they could be removed upon crossing the start line); elite-style aid stations to minimize contact; virtual goodie bags; and grab and go post-race food bags.  Although the field was more spread out than in year’s past due to the smaller waves and 3-minute intervals between waves, the race offered the athletes plenty of opportunities to cheer each other on with multiple out-and-back stretches.

The Wisconsin Half Marathon and 5K made it very easy and convenient for athletes from all over to participate in 2021.  Parking, both street and in public lots, was plentiful within a 10-minute walk of the race site.  A variety of packet pick-up options were available in both the Chicago suburbs and Wisconsin, as well as on-site pick-up the morning of the race.  For a fee, participants could also have their packets mailed to their homes.  A virtual race option was also added for 2021.

Two new course records were set during the beautiful, though WINDY, spring day.  Martin Erl set the new male half marathon record at 1:08:54 and Charlize-Trinity McKenzie established the new female 5K record with a time of 19:04.  Even though the race looked a little different than past years, the cheesy spirit of the Wisconsin Half Marathon was alive and well, making for a fun and low-stress start to the 2021 racing season.  Congratulations to all of the runners, as well as the Wisconsin Half Marathon race director and support team for putting on such a thoughtful, fun and safe event!

It takes a Village… or a Community…