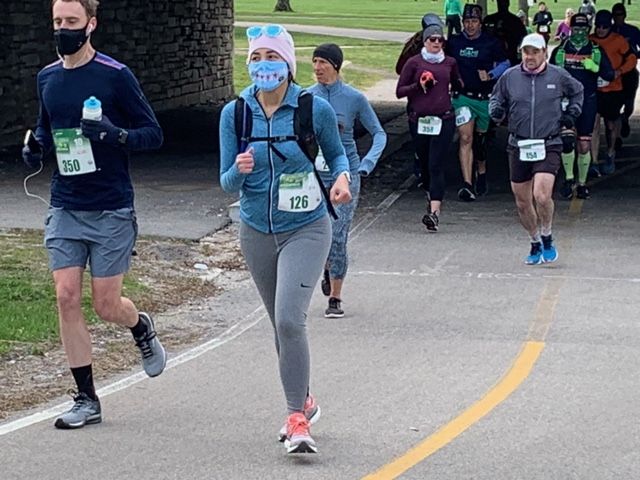 On Saturday, April 17th, the Chicago Area Runners Association (CARA) hosted the first in-person race of the year – the Wintrust Lakefront 10 Miler & 5K at Montrose Beach.  Registration included a green Long Sleeve Performance Shirt and bib.  Participants had an option to purchase finisher medals that were distributed at packet pickup.  The early bird bibs were limited to the first 100 registrations and sold out within the first 15 minutes.  With a limited event capacity of 750 people, the entire CARA Runners’ Choice Circuit race sold out well before race weekend.  It was obvious that the running community was anxious to resume racing in-person, and this event was the perfect kickoff to spring running. 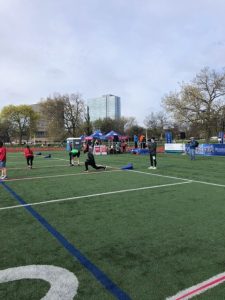 CARA set the example of hosting an athletic event while adhering to the safety guidelines for the State of Illinois.  The start and finish of the race took place at the Wilson Track.  Upon entering the event space, registered participants were masked and proceeded to their assigned pods written on their bibs.  In the pod, runners had their own dedicated toilet, hand sanitizer, gear check, bottled water, and post-race snacks.  Additional self-service bottled water was offered at the four aid stations throughout the course.  Medical support was available at each aid station, and CARA masked-volunteers cheered for the runners.  Runners lined up at the start line with their pods, and five runners were released at a time to start the race.  Once socially distanced, runners could remove their masks until they crossed the finish line. 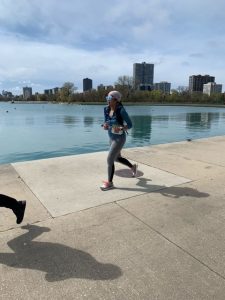 The temperature was in mid-40s F with a light breeze when we reported to the pods.  However, the weather started to warm up once the sun broke through the clouds.  As we were preparing to toe the line, we could hear the familiar voice of Dave Kappas making last minute announcements.  With the sight of the track and hearing “The Star-Spangled Banner” on the speakers, it felt normal again to be racing.  We enjoyed the views of the Lakefront Path, the skyline, and the various boats in the harbors.  The first half of the race felt fast as we were all excited to race again, but the headwind was brutal on the back half of the race.  Towards the end, you could hear a subtle groan among the runners once Cricket Hill appeared.  However, it helped knowing it was the last obstacle before we re-entered the Wilson Track. 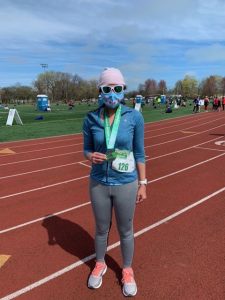 Chris Robertson (Male, 51:53) and Jane Bareikis (Female, 56:58) were the 10-mile distance winners, and Kenneth Sprague (Male, 16:17) and Mariana Trejo (Female, 18:50) won the 5K race.  Additional race results may be found here: https://results.chronotrack.com/event/results/event/event-60923.  Congratulations to all the finishers, and thank you to CARA and its volunteers for making in-person racing possible again in the City we love!