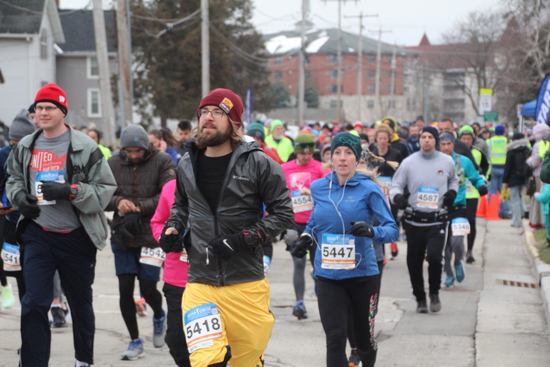 This past weekend, Silver Circle Sporting Events and the Waukesha Parks Foundation hosted their annual Trailbreaker races. With a distance for everyone, runners had the option of a full, half, 10K, or 5K. How this race company continuously offers so many race day options, nearly every weekend, baffles me. Sean Osborne, owner of SCSE puts on low key, friendly, well-managed races, truly built for runners.

On Saturday, April 2nd, runners gathered at 8am, ready to run their desired distance. Parking was free and surrounded the community center where runners picked up their packets and used INDOOR restrooms. We all headed to the start line, which was located on the road outside of the center. For families with children, there was a delightful playset to entertain the little ones. At 8am, the skies were cloudy and runners had high spirits in the 35 degree-ish weather. It seemed to be the perfect day for a run. Little did we know that winter was not willing to let go.

We began by weaving through the downtown Waukesha streets. Local law enforcement stopped traffic as we crossed over multiple city streets making our way to the Glacial Drumlin Trail. It was a picturesque 3 miles to begin the full course. There were clearly marked turning points for the 5K and 10K runners, which the half and full runners passed as we entered the flat, fast trail system.

At about mile 6, the smallest of snowflakes began to fall and I thought, well what a great way to say goodbye to winter. At mile 10, I was in a full blown blizzard, with heavy snow gathering at my feet. Having never run a full marathon in a snowstorm before, I was not aware of the challenges that would be placed before me.

For me, running on snow is much like running on sand. The ground texture causes me to exert a higher level of energy to push off from each step. I don’t get the bounce that I normally gain from hitting flat ground, thus propelling me forward. The energy that I put out through my steps is soaked into the snow and I have to push harder to gain the forward movement. I find it challenging on my training runs and extremely frustrating on races!

Not only was the actual act of running more difficult than normal, but the heavy snow soaked me head to toe. At the 13.1 turn, I realized that my soaks felt a bit damp. By mile 16, they were soaked. The relentless snow was beautiful on the trail system, which is lined with trees, but it was hard. I felt as though I earned every mile. 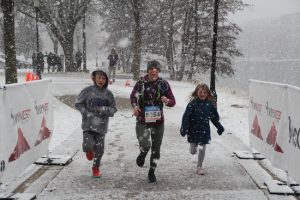 The aid stations were incredibly helpful cheering us on at each stop. One aid station toward the end of the race built two 4 feet tall snowmen to join their team! The course was well marked and runners enjoyed the beauty of the trail system, as well as the charm of the downtown areas. All runners received a bright pink, long sleeved shirt and medal.

Great job to all of the runners who ran the blizzard, I mean Trailbreaker in 2022. And a huge thank you to SCSE staff and volunteers for taking such good care of us!

The Heartbreak of a DNF