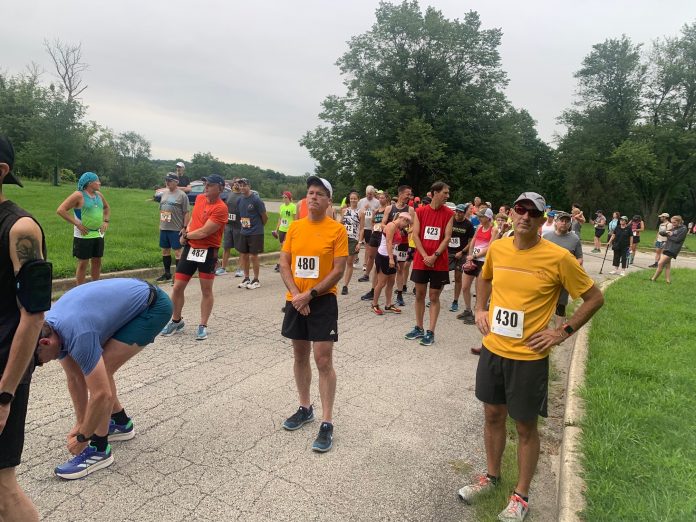 On Sunday, August 14th, I participated in the inaugural Summer Trail Classic put on by Dick Pond Athletics. All proceeds from the event went to Chicago Area Mountain Bikers (CAMBR).

The race was held in the Carl R Hansen Woods in Elgin. It was a looped course allowing runners to compete in a  variety of distances: 4 miles (one loop of the perimeter trail), 6.8 miles (two loops), 9.5 miles (three loops) or 12 miles (four loops). There was even a relay option which was very popular.

Chicago runners rejoiced when this race hit race calendars. Early August is slow for races around the Chicago area, because of the unpredictable weather. We all know it can be 105° and humid or 70° and lovely. It’s so hard to predict August weather, so race companies, naturally, tend to select other date options. But for runners, we miss our organized races at the end of the summer. So having this one was a welcome surprise.

A trail race to its core, the race was laid-back and full of nature. We began promptly at 7:30 AM and headed out about half a mile to the beginning of the 3 mile loop. The loop was on rolling terrain, but relatively flat compared to other trail systems. They were exposed roots and rocks, but it was largely packed down grass to run on. This course is a great trail system to run on for first time trail runner. 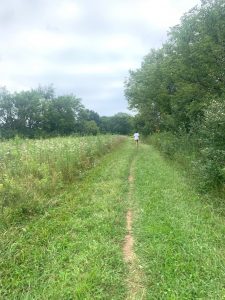 The course was lovely; filled with trees, native plants and flowers, and lots of tall grass. The bugs were minimal and the heat was low. However, the humidity came as a surprise, as it was rather thick. I did not feel too hot while I was running the event, but found myself drenched in sweat by the end. The end of the race capped out at 75°, but the humidity must’ve been pretty high, and I forgot a towel to cover my car seat! 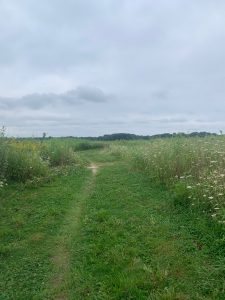 All runners received a short sleeved T-shirt and finishers received a heavy duty water bottle. Parking was very easy and right near the start/finish area. Runners had the option of race day packet pick up, which is convenient for those of us with little flexibility during the week. The cost was low to participate and runners received a scenic, nature filled trail run right in the suburbs, with a sweet swag package.

Definitely keep your eye out for this race next August. It’s a great way to close out the summer with a fun trail race.