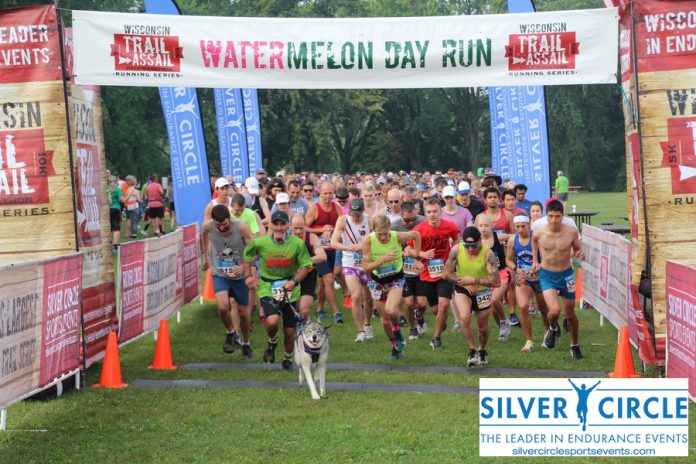 On Saturday, August 7th, Silver Circle Sporting Events held their annual National Watermelon Run, which is part of their Trail Assail Racing Series. The hardest part, to be clear.

This race wove through a highly technical trail section of Pike Lake State Park, which included rocks, roots, dirt, puddles, and hills. Oh so many hills. The half marathon contained just over 900 feet of elevation to challenge runners on a hot, humid morning.

The distances included a 5K, 10K, and half marathon. Runners all began at the beach, offering runners a beautifully scenic outlook, before they were hit with a challenging course. Like all Silver Circle Sporting Events, the race was well done, organized, and fun. The RD always sends out multiple pre-race communications to let runners know just what to expect. The SCSE team does everything they can to ensure that runners are not caught off guard by anything on race morning.

Runners began promptly at 8am and followed the same trail before signs directed runners to follow their distance. Normally runners had a mid-race challenge to climb the Ice Age Trail tower, however this year, runners were unable to tackle the climb as it was under construction. But don’t worry, this course was still a quad burner!

I ran the half marathon which had runners completing the 10K loop twice. After the first loop, it was hard to believe that I’d have to face the elevation and course challenges again. But, on I went! The trail was shaded with lovely trees and runners could really connect to nature. I am by no means an experienced trail runner, but I appreciate the challenge that a technical trail run can provide…once or twice a year!

All runners received a finisher’s metal and short-sleeved technical t-shirt for participation. It was a fun day and good way to celebrate the watermelon!