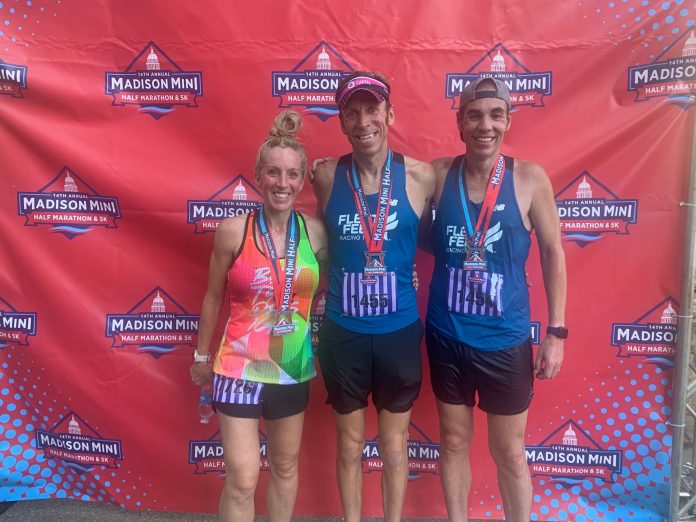 Today’s race was hot, humid, and hilly! We Chicagoan’s are familiar with the F3 winter race, so perhaps the Madison Mini Marathon and 5K should be renamed to the H3!

The race was held in downtown Madison, Wisconsin and pulled out nearly 3,000 runners to participate in the two distances. Registration, gear check, and late packet pick up were all held in the middle of the University of Wisconsin, Madison campus, directly across from the start/finish line. Runners had several different parking lots to choose from that provided a walk of just a few blocks to the race area.

Half marathon runners begin promptly at 7 AM just following the national anthem and morning announcements. It was already hot and sticky as runners toed the line. The course was truly a showcase of Madison, with runners enjoying campus views, sports stadiums, and even running around the Madison zoo. 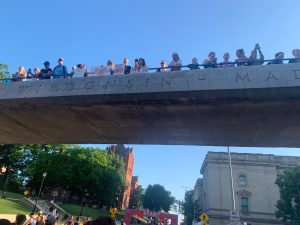 There were hills throughout the course, as Madison usually has, but they were not extreme until mile 12. And that mile 12 hill was indeed extreme. It was actually a two part hill with the first half being moderate, and tricking many runners, including myself, into thinking that we had finished. Then upon turning the corner, we were slapped in the face with a nearly upright, much longer hill to tackle before enjoying a downhill run to the finish.

The race was incredibly well done, and several aid stations were available with water and Gatorade. The finish line had a sprinkler system set up to quickly cool off runners. There was not a lot of tree covering on the course, so it was definitely a challenge. The heat and humidity rose throughout the morning creating strenuous conditions for runners on this course. There was a PR bell at the finish, but I don’t think too many people rang it on Saturday. 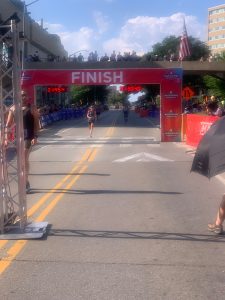 I thought the course was charming and enjoyed seeing the city showcased in that way. Downtown Madison is robust with coffee shops, bars, and boutiques. The campus is so fun to run through, and there’s nothing like a college stadium to raise your spirits. All runners received a large medal and short sleeved T-shirt. There were several tables filled with snacks at the finish line as well. I did not make it to the beer tent, but all runners also received a complimentary beverage of their choice.

I was reminded of a few hot weather running issues that I have not encountered yet this summer. The first was the need to have a towel when I get back into my car so that I don’t stink up my car seats. The second was the importance of changing into a new shirt. And the third, was the warning not to put your parking ticket into your run shorts. I returned to the parking deck with a disintegrated parking ticket and had to find a very kind staff member who would manually type in my entry and exit time, since there was no way this sweaty, crumbly, card was making it into a reader.

One of the highlights of the race was getting to run with two of my good friends from Chicago, Although we should have taken a pre-race picture before the intense sweat set it!

A great job done by Race Day Events and the city of Madison. I urge you to put this one on your calendar for next summer and tackle the heat with me again through the streets of Madison.