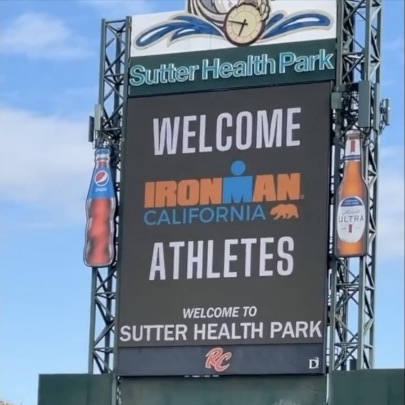 If you ask any participant what they remember most about the 2022 Ironman California race you will probably receive one of two responses: “OMG! The WIND!” or “Did you see my amazing swim time?”

The October 23, 2022 race was Ironman’s second attempt at an inaugural full distance triathlon in California’s capital, Sacramento. The first attempt in 2021 ended in a freak storm ominously known as a “bomb cyclone” that initially shortened the bike course and ultimately required the last-minute cancellation for safety reasons. The race organizers were intent on bringing the race back, bigger and better. Nearly 3500 athletes toed the line for their 140.6-mile victory lap in celebration of a long training year.

After absorbing the spectacle of several thousand participants bopping their heads in time to Eminem’s “Lose Yourself” as they snaked their way down to the north bank of the American River, the athletes enjoyed a super-fast 2.4-mile downriver swim that ended on the west bank of the Sacramento River. Both rivers are wide, and athletes had lots of space to spread out as they enjoyed the current boosting their pace by as much as 30 seconds per 100 meters.

After exiting the water and ascending a steep ramp, many athletes celebrated the return of wetsuit peelers, who were absent due to restrictions during most pandemic era races. It was here that the first major challenge awaited- the trek to and around (and around) the transition area. Located inside the Sacramento River Cat’s minor league baseball stadium, the venue made for a unique, but very long athlete experience. By my multisport watch, it was 1.1 miles from the swim exit through the changing tents and to the bike mount line.

The 112-mile bike course consisted of a double out and back track on narrow country roads that included beautiful river views, vineyards, and no small amount of suffering. The athletes experienced this as four distinct segments due to the presence of 20 mph sustained winds and 35 mph gusts: two fast outbound with a tailwind and two inbound with the same wind in the face. In practice, the result was a 5-10 mph reduction in speed heading back to transition. Athletes who trained for such an event and stuck to their plan for managing it had a distinct advantage in this segment, but all athletes wore a wind carved grimace.

After another trip around and around the stadium for the second transition, the athletes headed out for a 26.2 mile run along the river, through the “Old Sac” historic district, and downtown to raise their arms in victory in front of the lit-up dome of the capitol. Continuing the theme of unique athlete experiences, the last several miles of the race consisted of small loops around the Capitol complex that required finishers to run right past the finish line TWICE before being allowed to cross and hear the “voice of Ironman” Mike Reilly call their finish for what will be the last time for most. Mike has announced his retirement at the end of the season and Ironman California was his penultimate US race.

The Ironman California venue provided athletes and spectators alike with a mostly great experience. The race organizers went out of their way to work with the city tourism department and local businesses to ensure that all visitors were treated as valued guests. The finish line experience in front of the Capitol has the potential to become iconic.

There were a few areas that need improvement if the race is going to attract athletes year after year and ensure its longevity: The shuttle process to the swim start was unacceptably disorganized:  not enough shuttles, drivers who weren’t sure where they were going, and mixed athlete/spectator busses. In addition, many long-time Ironman Athletes noted the reduction in the frequency of aid stations- particularly on the run course. This is no-doubt attributable to the pandemic-induced shortage of volunteers impacting every race organizer, but when the cost of participating increases every year, Athletes expect a certain consistency to their experience. Hopefully, Ironman with solve these issues in the near future to continue to provide interesting, challenging venues in which to race. Ironman California has the potential to be a long-running venue that will attract PR seekers for years to come. It is already, in its first year, definitely a spectator-friendly race in a visitor-friendly city.