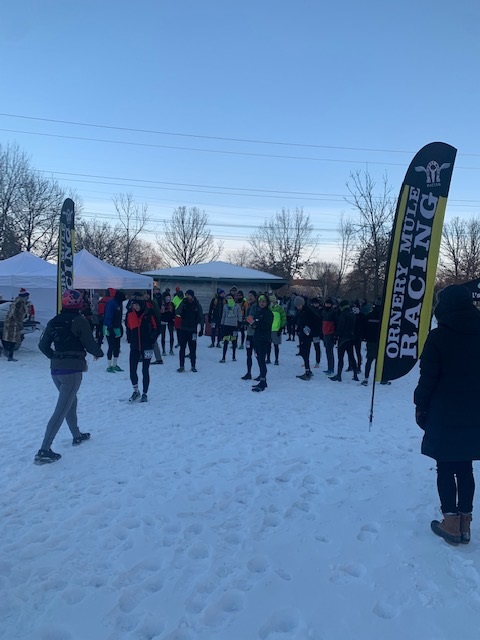 This morning, January 8th, 2022, I joined other crazy, like-minded, runners at Veteran’s Acres Park in Crystal Lake to start the year off with the Frozen Gnome trail races put on by Ornery Mule Racing. This is the first race I ever ran with Ornery Mule, and despite the always frigid temps that this race seems to produce, I was hooked from the start.

Race Director, Michele Hartwig, and her amazing staff and volunteers always put on a stellar event. And this year was no different.

Temps began in the single digits as the 50K-ers crossed the start line at 7:45 am to tackle the difficult course. 10K runners began shortly thereafter at 8 am. All runners started and ended just outside of the main shelter at Veteran’s Acres. The OMR team had draped plastic around an outdoor shelter and provided heaters to help warm runners as they waited for the start.

The energy was high as Michele counted down the start for both distances. Runners took off, ran around the baseball field, and began the winter journey through the park district trail system. This course is highly technical with roots, trees, and other nature items covering the trail. There was nearly 800 feet of elevation through the single 6.2-mile loop. Runners were challenged with multiple inclines and declines, including the infamous butt slide hill. This year the OMR team provided a rope for runners to grab onto on their way down. I took the rope and still found myself sliding down the majority of the incline. There’s a reason this hill has earned its name.

There were portions that were nearly un-runable as runners slowed to a walk to climb up a rock-filled terrain or to descend a slippery slope. The entire course was covered with packed snow, which adds an extra challenge in itself. I’ve always compared running on snow to running on sand, as you sink energy into your footfall, rather than propelling from a hard surface.

Even though the course is a challenge, it is incredibly beautiful and well-marked. The OMR team has signs and markings placed throughout the entire trail, ensuring runners know exactly where to twist and turn. This race is also well known for its swag, which changes every year. This year runners received a soft, cotton baseball tee with the frozen gnome image across the chest and a huge finishers medal. 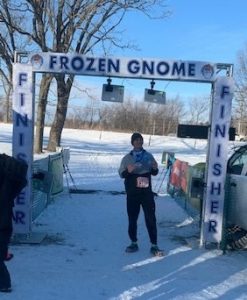 Congratulations to all runners and a huge thank you to the Ornery Mule Racing Team for an incredible event. You can check out all of their races here.