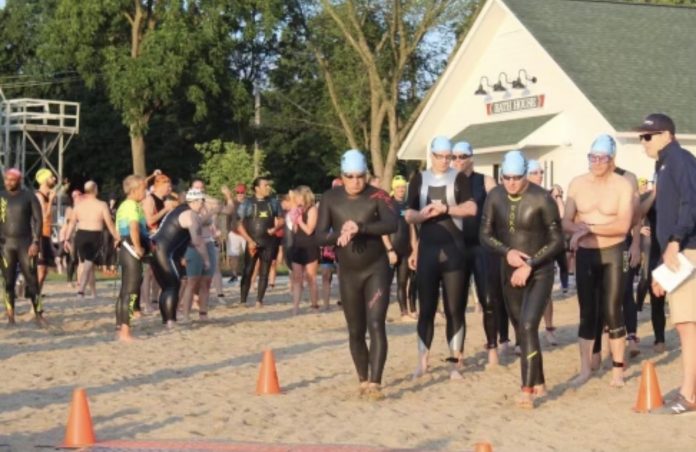 It seems odd, halfway into the race season, to write, “Triathlon is back, finally”. However, with many popular races suffering from weather related course modifications and stage cancellations in the early part of the 2021 “back to racing” campaign, it was refreshing for many athletes to experience a complete race at the 2021 Wauconda Triathlons.

Organized by the Wauconda Park District, the Wauconda Triathlons Multisport Fest is the kind of small, comfortable, homey event that Chicagoland area athletes are blessed with across many disciplines. It is also USAT sanctioned, so Age Group Nationals spots can be earned.

This year, the event took place over two days in and around Cook Park on Bangs Lake in downtown Wauconda, IL July 17-18. The multisport festival included a Kid’s Tri on Saturday and both Sprint and Olympic distance races on Sunday. The organizers also offered a “2/3 Tri” option- forgoing the half mile swim of the Sprint event.

The 168 Sprint and 154 Olympic athletes were shuttled a short distance to Phil’s Beach, a new swim start location this year, and were rapidly let into the 74oF water two at a time to swim towards the rising sun before turning for Cook park and transition. The bike course is a 12-mile loop (2 X for OLY distance) with some leg softening climbs in the early going and opportunities for speed later on. Both distances share the beginning and final parts of the run, with an additional out and back portion for the Olympic distance. The Olympic run course offers what may be the most challenging 10K circuit in Chicagoland, with nearly 800 feet of total elevation ascent.

Unfortunately, the post-race activities were curtailed in concession to the ongoing pandemic. Post-race food was provided in a grab and go bag, and there was no awards ceremony. The top two finishers in each category will receive their awards by mail.

The Wauconda Triathlons offer a very well-organized, well-run race with many local residents along the road to cheer athletes on. If you are looking for a mid-season Sprint or Olympic distance triathlon. The Wauconda race is highly recommended. Just be prepared for strange Black Panther comments from your friends when you tell them where you are racing.