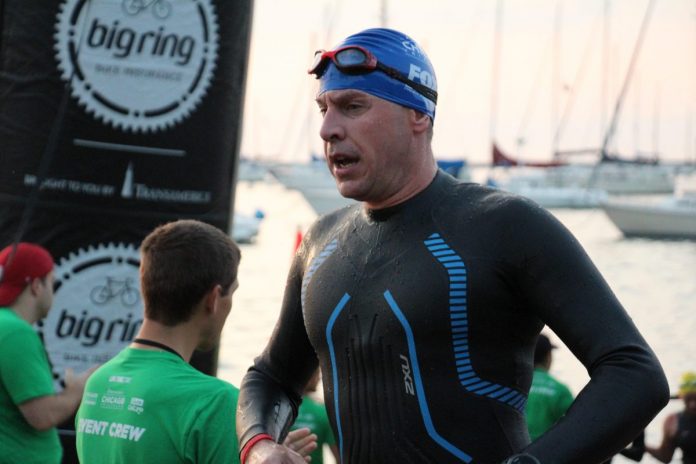 More than 9,000 athletes congregated in Chicago the weekend of August 26 to compete in the 34th annual Transamerica Chicago Triathlon, the nation’s largest triathlon. Athletes represented 46 states and 18 countries, and 49 percent of them were Chicago residents.

The weekend began at the Hilton Chicago Hotel, where the Multisport and Fitness Expo took place. Not only was this the place for athletes to pick up their race packets and attend the mandatory course talk prior to racing, but over 150 vendors had booths promoting their products. Different vendors included Fleet Feet, Specialized bike repair shop, Chicago Half Marathon, nuun, Chicago Endurance, and several other sport drinks and food companies. Official race merchandise was also sold at the Expo.

Races kicked off Saturday morning, with the Life Time Kids Tri Chicago. More than 1,000 youth ages 7 to 14 were registered for the 26th annual Life Time Kids Tri, according to a press release, making this one of the largest kid’s triathlons in the country. Hunter and Ryder Fetterolf took first in the 11-14 and 7-10 age groups for the Kids Tri, respectively. The Chicago Triathlon SuperSprint also took place Saturday, designed for new entrants into the sport, which featured the Divvy Wave partnership with Chicago’s bike-share program. Michael Stanek took first for the SuperSprint with a time of 32:50.

Finally, nearly 30,000 spectators gathered along the lakefront to cheer for racers Sunday morning during the Chicago Triathlon, which had both International and Sprint distances. About one-third of the participants were first-time triathletes, and half were competing in the Chicago Triathlon for their first time, the press release states. Andrew Schranck took first for males in the Sprint distance race, with a time of 1:13:29, and the first female was Jordyn Bloode who came in at 1:19:07. Top performers in the International distance included Jeremy Rielley at 2:00:39, and Rachel Pearson at 2:14:52.

In addition to the exciting event, the inaugural 100 Club Challenge featured 120 first responders competed in a “Police v. Fire” race. Police won the challenge, and raised $10,000 for the 100 Club of Chicago, “a local organization that provides for the families of first responders who have lost their lives in the line-of-duty,” says the press release.

Overall, the weekend was filled with positive energy and encouragement. From the Expo Friday afternoon to the finish line on Sunday, athletes everywhere exuded excitement and passion for their sport, motivating everyone around them. There’s a reason it’s the top triathlon in the country, as Chicago serves as the perfect place for such an important event; Lake Michigan’s waters are easily accessible and clean for swimmers, and the flat streets and paths are practically made for bikers and runners. The city’s liveliness, scenery and food scene is just a bonus for traveling triathletes to enjoy when they visit Chicago.

Because the event is so highly ranked in the country, many athletes are already looking forward to the 2017 Transamerica Chicago Triathlon, which opens for registration in October. Results and photos from the 2016 event can be found on the event website.