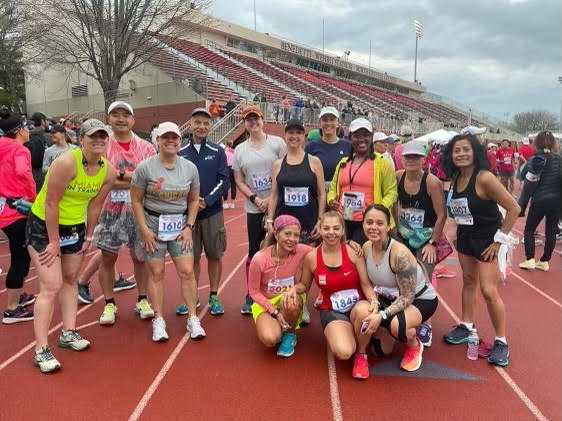 On Sunday April 24, approximately 1400 runners returned to the Benedetti-Wehrli Stadium, at North Central College in Naperville, IL. Over 800 Half Marathon runners toed the line at 7AM and close to 600 5K runners started at 7:30AM.

Plenty of parking spaces were available throughout the Downtown Naperville area and runners only walked a short distance to the start line. Packet pick up was available starting Friday 10AM through Saturday 5PM at Naperville Running Company on Jefferson Avenue. Onsite Race day packet pick up (6AM-7:15AM) and mail delivery with an extra fee was offered for those who requested. The registered runners received a green long sleeve shirt and timing chip bib at a packet pick up.

Runners were nervously checking the weather forecast all week. Thunderstorms were predicted at the time of the start but Mother Nature knew how much we needed her to hold off. High humidity and wind made this event more challenging but this is the one element of any outdoor races that runners have no control over.

Katie Colella, a resident of Woodridge, was courageous enough to show up for her first 13.1 race despite the weather forecast. Katie started running again about two and half years ago when her youngest son, Tony, was 6 months old. She signed up for this race because she wanted her first half marathon to be local and this women-centric race was just perfect for her. She nervously stood at the start line but continued to focus on her inner voice, “Just listen to your body, Katie!” Her children, Sam (age 6) and Tony (age 3) were cheering for her throughout the course with her husband. 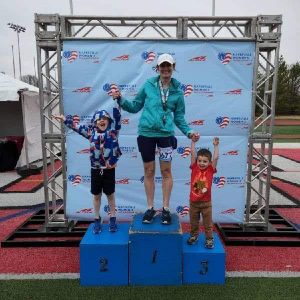 Jess Heitman, a resident of Plainfield, was also a first time half marathon runner. She chose to run this race because her gym friends were talking about it. She decided to challenge herself just a month prior to the event. At the startling, she whispered to herself, “please let me finish without any injuries! And under three hours!” And she did just that. With no injuries and definitely under three hours, Jess crossed the finish line. 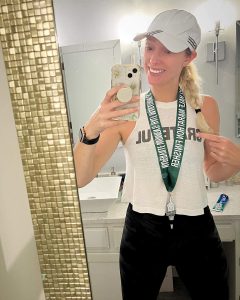 The race name “Naperville Women’s Half marathon/5K” didn’t stop 39 male runners from taking part in this race. Dan Ulaszek of Plainfield is a GirlDad of three lovely ladies. He was hesitant at first to sign up for this race because he wasn’t sure male runners were welcomed. But then he thought, “Women’s charities and support of the community in general is a big deal for my family.” He took the opportunity to run this event to show support for an event that took place where he grew up. Dan added, “The timing of this race was perfect to kick off my October Chicago Marathon Training.”

Robert Lee of Aurora is another male runner who participated in the 13.1 Naperville Women’s half marathon. He said he appreciated the opportunity to participate in an event that celebrates the great athleticism and camaraderie of female runners. Robert has been a big part of Team World Vision Naperville Team, much of whom are made up of women, they made a natural extend of invite to him to participate in an event they enjoy as a nice event in the city of Naperville.

Aaron Min of Aurora originally registered for the Naperville 10K race in June that was organized by the same organization. Since the Naperville 10K race has been canceled, the organizer offered to transfer all 10K registered runners bibs to Naperville Women’s Half/5K. Aaron said the name of the race didn’t bother him at all since he already runs with strong women of many backgrounds. Even with the possibilities of pouring rain, several ladies stayed behind to see him cross the finish line. Local races like these are important to support runners of all abilities, and it was great seeing so many spectators during the race.

The Naperville Women’s half marathon/5K has been one of my favorite races and I have been a part of this race since it started in 2016. My race plan was to run with a steady pace and consistent effort. Somewhere before reaching mile 5, I found myself struggling physically. I took this opportunity to challenge myself mentally and decided to move forward one block at the time. When all training hours and miles come together on a race day, you feel like you are on the top of the mountain. When things go the other way, you feel deflated. But every race for me is an opportunity to learn and level up. For that, I am thankful that I participated in this race and learned something new once again.