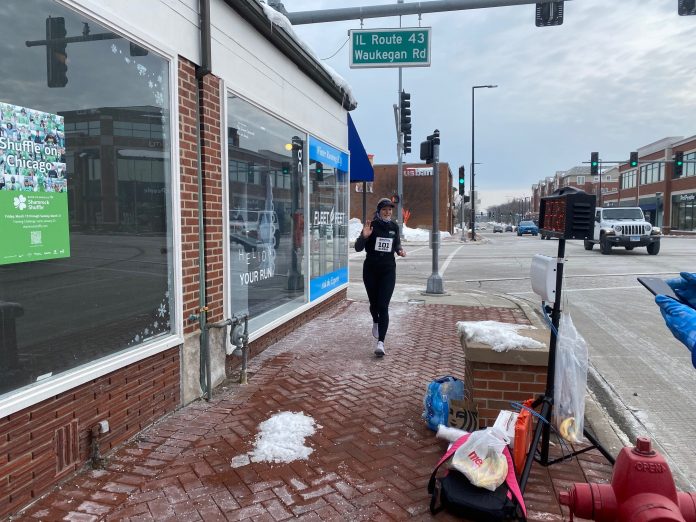 The Skokie Valley Path has an illusionary quality to it. It extends before you in a “far as the eye can see” paved straightaway that appears to climb slightly uphill either way you are facing as it thins and disappears into the horizon. For the sixty registered runners in the F^3 Deerfield Half Marathon, this path was home for most of the race.

Runners started by crossing a timing mat just outside the Deerfield Fleet Feet location. They made a short jaunt through downtown Deerfield, then headed north on the path before turning around at the halfway point. Start times were flexible, with runners able to begin anytime between 7:30am and 1:30pm. Combined with a smaller field, the staggered start times provided ample opportunity to socially distance from other runners. The race felt as safe as any virtual event we’ve had in the last year, while still providing the luxuries we’ve missed like a marked course, a real bib, and chip timing.

The distancing allowed the course to feel wide open at times and you could go several minutes without seeing another competitor. The path itself offered a mix of clear concrete, packed snow, and a little bit of ice. After the turnaround point runners were met head on with a cold breeze, reminding them they were running parallel with Lake Michigan, just three miles from the shore. Despite the challenging conditions, when runners did encounter another competitor on the course they were met with waves, encouraging yells, and beaming smiles forced through slightly frozen facial muscles.

There were no crowds, bands, or beer tents at the finish line. Those are unlikely to return to any event for quite a while, but the timing mat was still a welcome sight. Race director Zach Edmonson was also waiting at the finish, handing out water, bananas, and hot cocoa, which he warned every runner was becoming less “hot” by the second.

In all, this F^3 event was exactly what it promised to be – a transition back to in-person racing. F^3 was created over a decade ago to fill a need in a community lacking in winter running events. It exploded from those humble beginnings, prompting the creation of F^3 LLC and grew to become a premier event for Chicagoland runners seeking winter competition.

Like the Skokie Valley Path, we still have a seemingly uphill climb out of this global pandemic. Still, F^3 has branched out from its Soldier Field home to provide winter racing opportunities around the suburbs. In a full circle kind of way, F^3 has returned to its initial mission – to once again provide something sorely needed in the community.

The swag this year says it best: Running is essential. 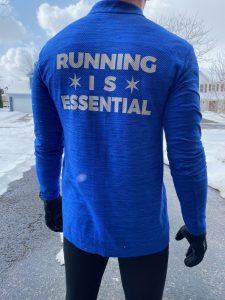