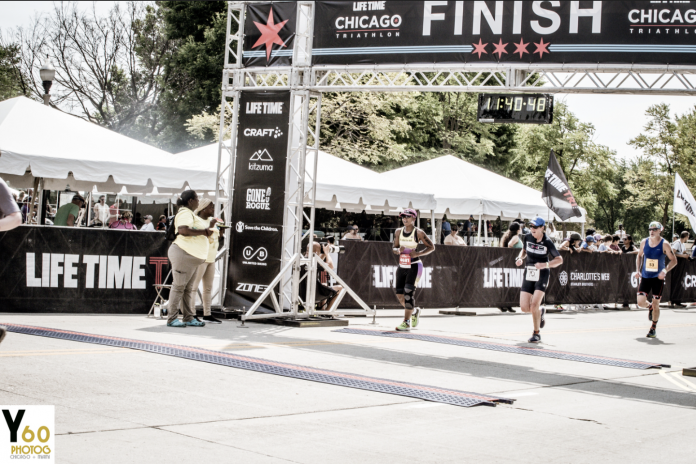 Friday, August 26, 2022, kicked off Chicago Triathlon weekend, which included a few continued traditions, as well as a few new aspects. Friday’s race packet pickup and expo was still located at the Hilton Chicago on Michigan Avenue, however, the entrance and rooms were different and it was a bit smaller than previous years prior to 2020. The expo still had some great vendors. And though the official race gear had some nice and appealing options, I believe due to smaller numbers of participants and inflation, the pricing was quite high.

One addition to the weekend that I think they should keep is providing the option for watching the virtual Athlete Briefing that was earlier in the week as well as the in-person option that was provided on Friday or Saturday.

On Saturday morning, the Kids Tri started at 7:00am, followed by the Supersprint (375m swim, 6.5 mile bike, 1.5 mile run) at 10:00am. The beach start of both of these races at Foster Beach fit perfectly into what was a perfect sunny day full of excitement of both children and adult racers with family and friends watching. It’s always fun watching and supporting the variety of participants including but not limited to: first time triathletes, the Divvy wave participants (those that use Divvy bikes for the bike portion), and those racing the Triple Challenge (athletes racing the Supersprint as well as Sunday’s International and Sprint distance races).

Let me preface this portion of the recap by first sharing that this is my 15th year of racing triathlons and it definitely was not an easy one. I’ve raced the Supersprint (750m swim, 15 mile bike, 3.1 mile run) several times before racing my first International distance (.9 mile swim, 24.8 mile swim, 6.2 mile run) Chicago Triathlon in 2016, which at the time was extremely fulfilling and one of my proudest races.

This year I’ve been experiencing a knee injury, as well as dealing with a lot of stress, mentally & physically tired, and an extremely hectic summer due to work, which also led to me not training nor feeling as prepared as I’m accustomed to. To be honest, I went into this weekend exhausted, having had a trying (no pun intended) week at work, and not feeling sure I wanted to race.

It was hard for me to fall asleep the night beforehand and at some point I got teary-eyed thinking if I should race. I woke up that morning feeling alright and as I arrived, I focused on getting mentally focused. The international distance race, which kicked off at 6am, was already under way. Walking to the start, I was able to see how certain areas of the second half of the swim route were quite choppy. At this point getting my game plan and self talk, while also seeing other fellow triathletes and friends was encouraging and helped me get my head into the race.

At sum point while walking in the area of athlete clubs, I must have misstepped on an incline and my knee started to hurt slightly. I tried to stretch it out and thought when I got in the water, hopefully it would be therapeutic.

This year the age group waves were combined with both male and females. There was also a change to each wave entering the water in small groups of five with a staggered time trial start. By the time I moved up to the start in my wave, I thought I was pretty confident about at least the first half of the swim. When I jumped in, as I started to get into my stroke, I beelined towards the first both to calm myself.

It’s typically thought to not get too close to the harbor wall as the waves can push you into the wall and you get cut or scratched on nails, wires, poles along the wall, which is why I opted for the side with the lifeboats. In the first few moments, I changed my game plan and crossed over to go along the wall and just risk it. Along the wall I swam, I got comfortable in my stroke and just kept going with a nice even pace.

When the waves got really choppy, I stayed relaxed and let the waves carry me as I swam. It actually felt good and at one point I thought I could just stay in the water and swim all morning…lol. 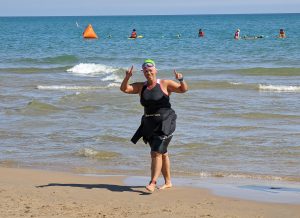 As I finished the swim and got out of the water, I usually run the long carpeted path to transition, but I realized my knee hurt when I tried to run. Especially without shoes, I opted to take it easy and speed walk into transition. 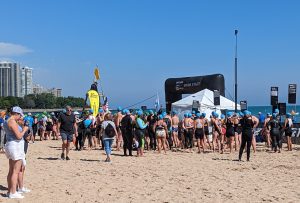 My transition took longer than usual, however, I wanted to ensure getting some KT tape to try to relieve my knee for the bike. On to the bike, that first uphill up the ramp onto Lake Shore Drive is a beast to conquer, but the rest of the ride north was awesome. With the first half of the ride being fast and furious, a short distance after the turnaround was the realization of strong headwinds. An open and free Lake Shore Drive makes for a fun ride, and by the time I was back in transition, this was the first time in a race, I didn’t look forward to the run. 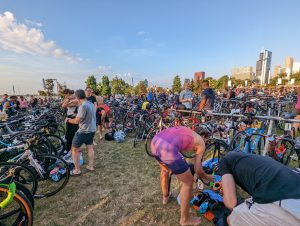 During this transition, I focused on re-taping and getting my knee brace on. As I walked and tried to run towards the run out, it was obvious that not only could I not run, but with the pain in my knee, just walking was questionable.

As I headed out onto the run, I was faced with dealing with my doubts, questions and pain on the portion on which I typically perform the best. I wondered if I would be able to even walk 3.1 miles because at this point, I was severely limping. I wouldn’t recommend it to anyone because you can injure and do more damage to yourself.

Less than half a mile into the run, I was in tears. I hurt, but I made it this far and with an even paced limp, I could finish in less than an hour. I decided to just keep going for it. I wanted to finish this race, so I was determined to fight through the tears. If I could make it through the race having as much adversity as this year has been, then that would make this a truly special experience and even more rewarding than previous years.

There was a lot of encouragement from fellow participants, supporters, volunteers, and spectators, which I noticed more this year than I had in previous races. As I turned onto Columbus for the last leg of the race, I was almost in disbelief that I was actually going to finish this race. In past races, I’ve conquered fears, however, this year finishing through uncertainty, adversity, and pain made it even more special and emotional.

Being born and from Chicago, racing Chicago Triathlon has held a special place in my experience of racing triathlons, and this year makes it even moreso. And we Chicagoans love to have our city on the map of places to be and events to go. With participants from over 15 countries and 46 states, #CHITri is still one for anyone to add or keep on the list. Congratulations to all the finishers!