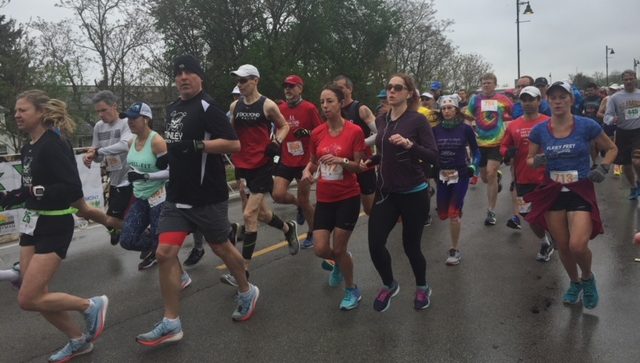 The Quarryman Challenge has become a local favorite in the Chicagoland area, offering a unique, scenic and hilly course through the historic neighborhoods of Lemont.

Lemont is about 40 miles from Chicago, a relatively quick drive south from the city. Race day morning was cold and rainy, not ideal for running. I arrived at the race site early to pick up my race packet. Most runners were gathering inside the village hall to avoid the cold and rain. We all soon found out that the weather radar was showing a severe thunderstorm coming our way. Due to the weather and mostly the threat of lighting around the area, the race director announced the start would be pushed to 8 a.m.

Tri Right, a local triathlon coaching company, was helping with race registration and gear check. I ran into my old teammate Kristen Salkas, who is a sponsored athlete, and hung out at their tent while we waited for the race to start. Unfortunately, the storm started and so did the lightning, we were forced to seek shelter and wait out inside the village hall. After further review of the radar, the race director announced that the 10 miler was canceled but the 5k would take place at 9 a.m.

The runners were disappointed but understood the race organizers were doing the best they could and had communicated their plan in emails prior to the race. I think we can all agree that safety comes first. At that point, some people left, but the majority stay to run the 5k. We were lucky because at time the race started the sky cleared up and we had decent running conditions.

Now let’s talk about those hills! The race starts with a challenging half a mile hill but you get rewarded with a wicked fast downhill. The rest of the course was a blurred for me, the hills kept coming and my legs were screaming. I managed to finish second in my age group and earned my very own “piece of rock” award.

The Quarryman’s unique, hand-made “piece of the rock” awards made from local quarry stone are awarded to first through third overall male and female who also get prize money. Awards also go to the top first through third in each age group, male and female masters, “king of the hill”, First Lemont resident, and my favorite one, a “mid packer.” It is a unique and appropriate award for this road race.

After all the delays and course changes,the  race director awarded a special award to the best question of the day, brought by a 10 year old boy named Alejandro: “if the race gets cancel do we still get pizza and beer?” Side note, this same young boy passed me at mile 2.5 (true story) flying down the last downhill, it helps being young.

I will definitely be coming back next year to run the full 10-mile course. If you are looking for a new challenge, this is the course for you. It will keep you honest and good pacing is the name of the game.