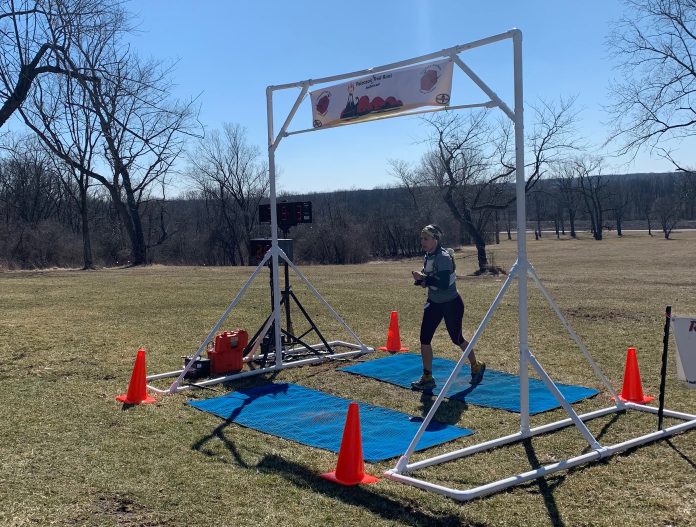 On Saturday, March 23, nearly 200 runners took to the trails in the seventh annual Spring Season Paleozoic 50K and 25K on the Palos Trail System. This low-key race is organized by Bill and Michelle Thom and attracts many loyal runners who enjoy this course year after year.

I found out about this race on the Flatlanders Facebook Page, a trail and ultra-running group based in the Chicago area, which includes “Flatlanders” from all over the Midwest and beyond. Begun by Ten Junk Miles Podcast host, Scotty Kummer, this group does not require dues for membership, but instead asks for each member to commit to crew or pace another member, and to volunteer at one ultra per year.

I figured if the Flatlanders were recommending this race, I ought to check it out, and I’m sure glad that I did. Not only are Bill and Michelle incredibly organized and communicative with runners, they also created an amazing course, full of challenging hills and technical terrain.

The races had staggered starting times with the 50K beginning at 8:30 a.m. and the 25K beginning one hour later at 9:30 a.m. Both races followed the same out and back course, so the different start times ensured everyone had space on the trails.

Racers began and finished at the Pioneer Woods section of the Palos Trail System, owned by the Forest Preserve District of Cook County, which is located approximately 22 miles southwest of downtown Chicago. Runners enjoyed free and plentiful parking right near the start/finish and short porta-potty lines before race start.

Runners enjoyed an out and back 7.75 mile course with a variety of surfaces including crushed gravel paths, rugged dirt trails, occasional grass segments, and even stretches of eroding asphalt. Much of the path was still lined with leaves from the last fall. Several sections of the path were extremely muddy with a few water lined areas that runners had to trek through. Race directors gave runners pre-race day warning of the mud and water and recommended trail shoes be worn for the edmeds24.com.

The morning was full of sunshine with temps in the mid-30’s at race start, making for great spring trail running. The course was stunning with tree lined paths and nature at its finest. The course was challenging with the several elevation changes and uneven terrain making sure runners were paying attention to each footstep. Race directors and volunteers did an excellent job with pre-race communication, course markings, and ensuring that all runners had a fun and safe day.

Participants received a long-sleeved technical t-shirt and eye-catching medal, complete with a dinosaur on it! I highly recommend putting this race on our calendar for next spring.