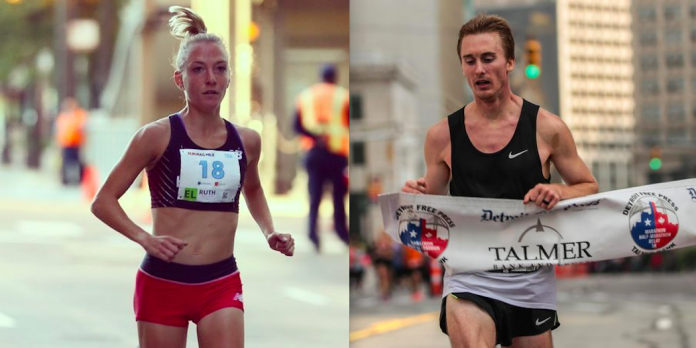 “I attended Lake Park High School and played volleyball, basketball, and soccer. My first time ever racing was my sophomore year of high school, I joined the cross country team to stay in shape for basketball. I went on to compete at Eastern Illinois University. Competing in college taught me a lot about myself and who I wanted to become as a runner and competitor, and I soon joined Second City Track Club! It was the best decision I have ever made in my life; marathon training is intense but so worth every hour during the day. My debut marathon was in 2017, and went better than planned because I was physically and mentally prepared due to the team, and ended up running 2:51:27.” Garippo was the eighth Illinois female finisher at the 2017 Bank of America Chicago Marathon, but due to a back injury did not run any marathons this fall.

“I’m from Ironwood, MI and that’s where I got my start in running. I ran throughout middle school and high school and that’s where I really fell in love with the sport. I was fortunate enough to continue running in college at Grand Valley State University where my teammates and coaches pushed me to a whole different level. After college, I still had the desire to keep running and really see what I could accomplish. Post-collegiate running has been trying at times, but the memories from some of my best races (including qualifying for the 2016 and 2020 Olympic Marathon Trials) are definitely worth it.” Peterson was the first Illinois finisher of the 2017 Bank of America Chicago Marathon with a time of 2:18:47. He defended that title at the 2018 event, with an even faster time of 2:17:15.