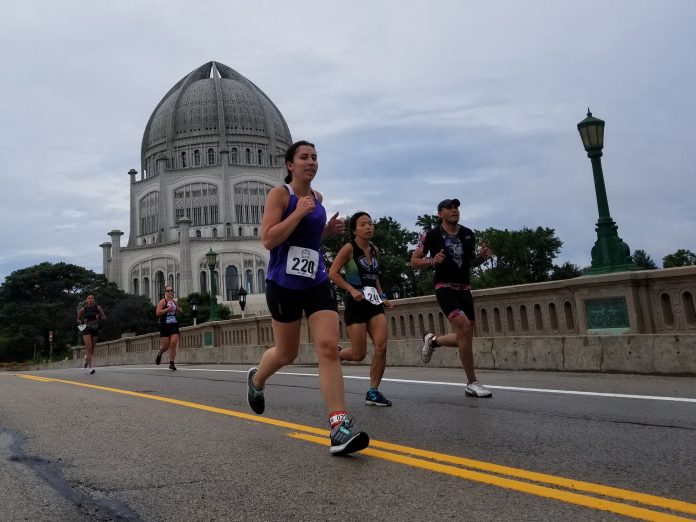 The weather tried its hardest on Sunday, August 15th to disappoint local triathletes again, but race organizers never wavered as the rain let up just in time to race the seventh annual North Shore Triathlon in Wilmette.

For many, it was a race of retribution. After the Chicago Triathlon was forced to cancel their swim, many signed up to show their open water swimming training wasn’t for naught. Others were out to race their first tri, join friends in a relay, or to cap off the racing season with a fast sprint before the weather turns. And for a small number of brave souls, it was about challenging themselves with the sprint and super sprint distances back-to-back.
Any challenge from cold lake temperatures was balanced with an easy course that went along the shore. The bike was two laps on a closed course along Sheridan Road followed by an out and back neighborhood run. The course was well marked with cones and the volunteers were encouraging and helpful throughout. But the best view award goes to running past the Bahai Temple of Worship when you headed out on the run.
Overall, it’s the small touches by hosts Precision Multisport that keeps racers coming back. The elite wave helped the faster athletes from all age groups go head-to-head. This also keeps the course safer with fewer athletes plowing through from behind. Most importantly, the race supported The Josselyn Center, an organization committed to mental health care. In addition to standard donations, participants were given the opportunity to forgo their medal in exchange for a five-dollar donation—a creative approach to raising funds and giving racers a unique way of helping out.
Winners included:
Courtney Ackerman and Vachee Loughran (Sprint)
Jenna Meyers and Michael Rubine (Super-Sprint)