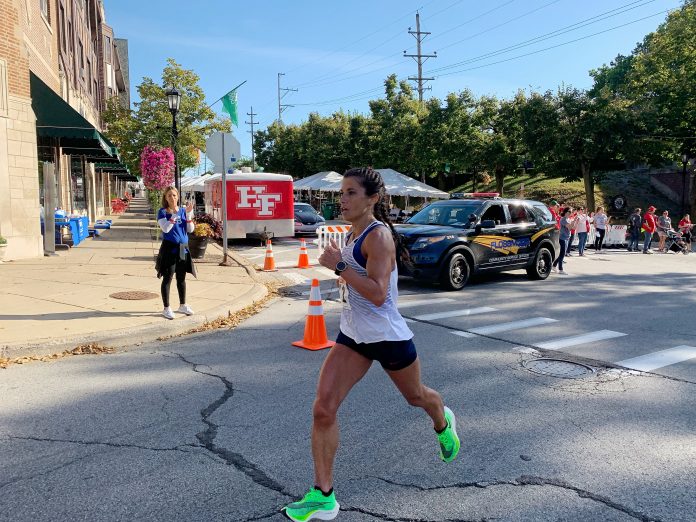 While running the Lakefront 50K in early November, I listened to a Ten Junk Miles Podcast featuring Chirine Njeim and lost myself for about 20 miles. Scott Kummer, host of the podcast, chatted with Chirine about her many accomplishments, Olympic experience, and how she overcame an eating disorder.

Like most TJM long runs, I laughed, cried, and forgot about my tired legs. I reached out to Kummer and asked if he’d connect me to this amazing woman so that I could interview her myself. Today, I did just that and left the interview with a new running buddy.

By way of background, “Chirine the machine,” as she is known, represented the Country of Lebanon in the 2002, 2006 and the 2010 Winter Olympics, and the 2016 Summer Olympics. She competed in the Women’s Downhill Skiing, Slalom, Giant Slalom, and Super-G, as well as the Marathon events.

Chirine moved to Chicago from Utah and attributes her entry into running to our fine City. Coming from Utah to our flatland, she didn’t know what to do without the mountains. “I slowly started to run in order to discover the different areas of Chicago. It’s so easy to run here. And, the lakefront is amazing. I run there every day. People always ask if I get tired of running up and down the path, but every day it’s a different view. The city is incredible and it’s so convenient for runners.”

She qualified for the 2016 Lebanese Olympic Team at the 2016 Houston Marathon, where she finished with a time of 2:44.14. Although it was her summer Olympic debut, Chirine had competed in three previous winter Olympics.

“Being at the Olympics is like living a dream for 2 weeks. It’s not even real. I’m just a normal athlete that tries to do my best out there, but at the Olympics you feel so special. You become so important that you don’t know how to handle it. Being in the village, surrounded by all of the athletes, is like nothing else.”

When asked about the difference between the winter and summer Olympics, Chirine stated that the biggest difference was the amount of equipment and clothing needed. “Winter is interesting because you’re taking six or seven pairs of skis and several different poles. You go to the race with a lot of equipment. Helmet, clothes, etc. It’s a lot of packing. For the summer, I almost felt like I was missing something. Part of me felt like I was going on vacation. You know when you go on vacation you pack your running clothes, flip flops, summer clothes. It’s so different from the winter packing.”

Chirine not only attended the Olympics, but carried the Lebanese flag during the opening ceremony. “Walking to the opening ceremony and carrying the Lebanese flag is such an amazing feeling. I still get goosebumps talking about it. It’s unreal and indescribable.”
Today Chirine trains with Second City Track Club in Chicago and is frequently at Montrose track and the Lakefront trail for her easy and long runs. She completed the 2019 Chicago Marathon and was invited to represent Chicago in Osaka, Japan. Next Wednesday she will be going to Japan to run the marathon there, where she will be representing Chicago with one of her teammates. “I am so excited. I can’t wait. It’s going to be a different experience than any other marathon. To represent Chicago in Japan is really great.”

Normally Chirine would have also raced the Lebanon Marathon, which is held the second weekend of November, but unfortunately the race was postponed until next year because the country undergoing a revolution. “I go back to run the Lebanon Marathon every year. It means so much more than just running to me. I love being there and being that person that can inspire the next generation.”

“Sports in Lebanon has become a way of bringing people together. For one day, politics are removed from everyday life. The marathon brings people together to, literally, run together in the same direction.”

Chirine plans to return to the Lebanon Marathon next November, but for this year, she will be heading to Osaka to represent our fine City.

During the TJM podcast, Chirine was also very open about her struggle and eventual victory over anorexia. “I’m very comfortable talking about it and I’m always trying to help others. Sadly, it’s something that a lot of athletes experience. It’s probably most prevalent in running, because you think the thinner you are, the faster you will be. But if you think about it, when you’re eating, you have no energy to perform and you’re prone to injury.”
“People see me and think I’m a gymnast. I don’t look anything like a runner. Everyone has a picture in their head of a thin, skinny runner and I could never be that. Sometimes we go to places we shouldn’t, and push ourselves too hard. This led me to become anorexic.”

Recently female athletes have begun speaking about their experience with coaches pressuring them to become thin. “I’m proud that those female athletes are speaking out and will actually send a message to other athletes that are struggling with that. Coaches need to be aware of this and not let these kinds of things happen. It feels good to be able to perform and you can’t perform when you’re not eating.”

Chirine sends messages of support through her words and her performance. “I always say don’t let running take over your life. Make it part of your life. Enjoy it, have fun with it. Listen to your body. If you feel tired or you’re not in the mood, change it up. Listen to your body and the rest will come together. There’s no magic. That’s the beauty of it. Running is simple. You can do it anywhere. Don’t complicate it. Keep it simple and have fun with it.”