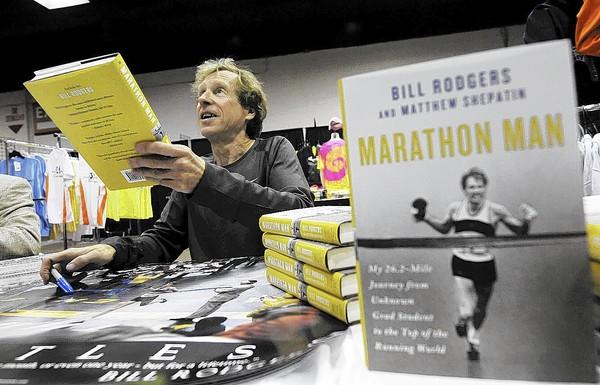 Forty years ago, Bill Rodgers was the best marathoner in the world, and a true “people’s champion.” His popularity stemmed from his everyman image as much as it did from his four victories each in the Boston and New York City marathons.

For many of us, getting to the starting line is only the tip of the iceberg to our story. The journey of how we got there is much more compelling, and many times very inspirational.

Rodgers’ journey is what details in his biography, “Marathon Man,” an easy-to-read account of a guy who was really good at running, it just took him a while to figure that part out.

Most of the book is neatly interwoven as he jumps back and forth between his life story and his memories of the day he won the 1975 Boston Marathon. His account of what happened is compelling, as he details what it was like to run at the front of the field and how the crowd became more whipped into a frenzy with each passing mile.

It’s good stuff, but the story of how he got there is even better.

Though he was a talented runner at Wesleyan University, as well as a roommate and running partner of Amby Burfoot, who won the 1968 Boston Marathon while still a student, he all but walked away from the sport for three years after college, spending his time smoking, drinking and working second shift as an orderly at a hospital, where one of his duties was taking dead people to the morgue.

Completely disillusioned with life and not knowing where he was going next, Rodgers on a whim went out on a run on a one-mile dirt loop around Jamaica Pond, which was just across the street from his apartment. Then he went out the next day and the next, and soon he was running 100 miles a week again, like he had been while training with Burfoot in college.

He didn’t think of himself as a “long distance runner,” and questioned that more than ever when he ran the 1973-74 Boston Marathons and dropped out both times at Mile 21. It was about that time he joined the Greater Boston Track Club, and the competition and camaraderie that existed in the club took his running to a world-class level.

The amazing thing about Bill is that when he isn’t racing he is calm, laid-back and a friend to everyone. In fact, many of his running partners couldn’t believe how on training runs he would stop and look at scenery, pick money up off the ground or point out things to others that they didn’t notice. They were also jealous of him because his running style was so free-flowing and natural. He didn’t run on the road, he glided over it.

He explained that he sees running as a connection between himself and his environment, and just loves to enjoy every step. But when it came time to race, he became a totally different person.

Rodgers never raced for time, he raced for competition and he raced to win, and between 1973-80 he won 14 of the 28 marathons he entered, as well as many of the other prestigious road races of the era. He loved pushing the pace and running up front, and ultimately that led to a success which allowed him the opportunity to travel the world and experience things he never thought possible.

The book is well worth taking the time to read, not only to learn Rodgers’ story, but it’s also fascinating look into the sport when it was just about pure running, where guys with little to no money just pounded out 120-mile weeks and raced as much as they could. They were pretty talented too: in 1975, 22 men broke two hours, 20 minutes at Boston, four more than the total of the last two years combined.

Rodgers talks about the time he ran a 20-mile race in jeans and a sweater, or how the shirt he wore when he won his first Boston Marathon was one he found in a dumpster and wrote “Boston GBTC” on the front in marker. He also goes into great detail about his rivalry with Frank Shorter, and how it wasn’t until they were much older did they realize they were more alike than different.

“Marathon Man” is full of great stories like that, and is a great reference to get some inspiration and motivation for the coming year. And if you order it directly through the Bill Rodgers Running Center, he will also sign it. When I ordered the book two years ago, his inscription to me read “Let’s Run Forever.”