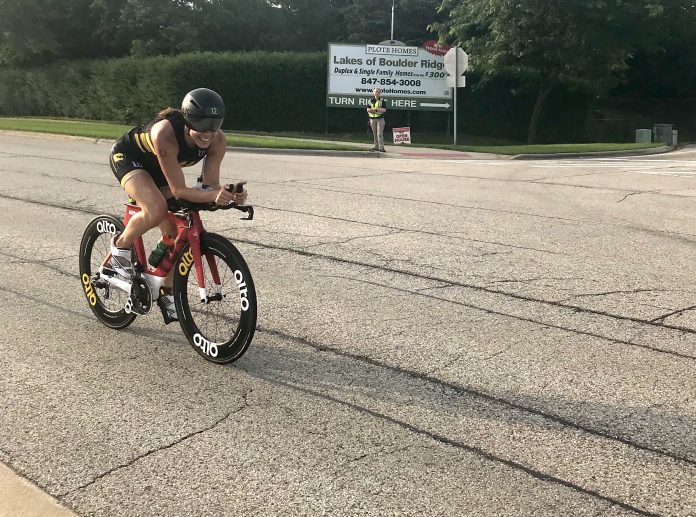 The Lake in the Hills Triathlon is my personal favorite local race; it’s a smaller race held on Father’s Day that is well-organized, family friendly, and full of energy.

The swim takes place at Indian Trail Beach in Lake in the Hills. It usually is a half mile swim, but this year things were modified slightly and the swim was closer to 900 yards. There is a little seaweed in the lake, but otherwise, it’s a standard lake swim. The great part is that this swim is almost always wetsuit legal; even with all of the super hot temperatures lately, the lake was only 75 degrees (cut off is 78 degrees).

After running out of the water onto the grass (so that you don’t get all of that sand in your shoes!), athletes grab their bikes from transition and are immediately greeted with a short but steep hill — it isn’t called Lake in the Hills for nothing! Growing up in Crystal Lake, it’s always fun for me to fly past the Randall Road intersection at 20+mph during this race as Randall is a super busy road that is blocked by cops during this portion of the race. Athletes face maybe five turns on the out-and-back course, which offers the chance to see how you are doing compared to others.

Just after 15 miles, athletes stop at transition two and head out for the four-mile run. Again, being named “Lake in the Hills,” athletes can expect a few challenging hills throughout the run course. This year was extra brutal being 90-ish degrees and humid. Very few smiles were seen on the run course!

The race begins at 6:30 a.m. with the Elite Wave and all finishers had completed the triathlon before 9:30 a.m., which means athletes still have most of the day to celebrate dads. The volunteers here are really great and were full of energy throughout the day, despite the miserable heat. If you’re looking for a local race that’s well-organized, sign yourself (and dad) up for the Lake in the Hills Triathlon on Father’s Day!

For details on my personal experience at this race, visit jacquisjourney.com/blog