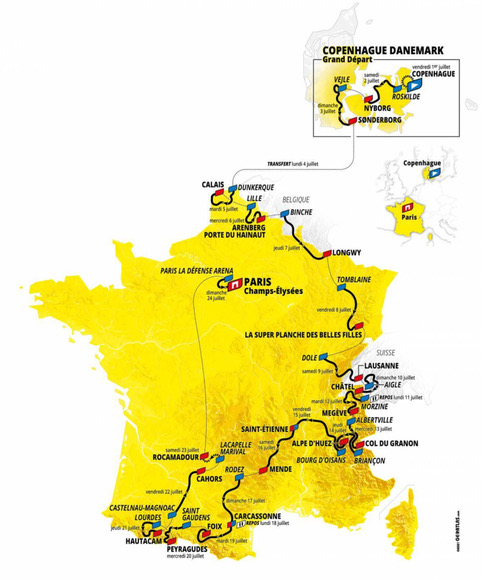 The 2022 edition of the Tour de France will begin on July 1. To me, the Tour is like the Superbowl, a Stanley Cup game 7, and the World Series–every day– for three straight weeks! To many people, bike racing is “just a bunch of skinny dudes in colorful skintight Lycra and ridiculous socks riding for six hours straight, right?”  It is that–and so much more. If you enjoy sports spectating, I hope that you will give the sport of bicycle racing a try. This guide will attempt to unravel the mysteries of watching a Grand Tour event to help you along the way.

NBC Sports has held the broadcast license for the Tour de France in the US for years and have broadcast it on various versions of their networks (Versus, The Olympic Channel, NBC Sports Network.) This year, for those who have not yet cut the cord, NBC will provide the daily broadcast on USA network and CNBC. If tradition holds this year, there will be live coverage early in the day with an edited version available in the evening. The races typically start in the afternoon in France, meaning live coverage begins early in the morning in the US. Coverage will also be available on NBC’s Peacock streaming service– both live and replay.

The Tour de France is a “stage race,” and is one of three “Grand Tours” or three-week races that are contested each year along with the Giro d’Italia and the Vuelta a España. Each day — or “stage” — is a self-contained race, with results accumulated over the entire Tour of 21 stages. Each stage presents its own challenges and opportunities for competition. This year, the tour will encompass 3,328 kilometers (or, for the imperially minded non-cyclists, 2,067 miles), and riders will visit Belgium and Switzerland as well as France and Denmark. As is traditional, the race will end in Paris on the iconic Champs d’ Élysée on Sunday, July 24.

Twenty-two teams of eight riders will compete in this year’s edition of the Tour. Teamwork and racing tactics are critical to overall success in stage racing and the brightly colored racing kits each team wears will allow you to know who’s who.

If one were to ask ten random people what city the Tour de France will start in on July 1, I wager that 8 out of 10 would say “Paris” with the other two something like “Lyon” or “Nice.” The 2022 edition actually starts in Copenhagen, Denmark! In recent years, the Tour de France has held its start in other countries in Europe- sharing the spectacle of a Grand Tour to other places. A few years back, something like 3 million people came out to watch the stages held in England. This year, the first three stages will take place in Denmark, the northern most country included in the Tour’s history.

One of the reasons stage-racing is so exciting is the fact that there are so many competitions (races within the race) to get behind. A total of €2.3 million will be awarded in 2022 across these classifications. It can be a little confusing to follow them all. Here’s a brief overview:

The course of the Tour de France challenges every single rider every day. Whether it is a flat stage with wicked crosswinds along the coast, a high mountain pass, or a cobblestoned country lane, the race organizers provide varying terrain for the riders to conquer on their ride around France. Different riders excel on different terrain, and the mix makes for an exciting race. The course on any given day both dictates team tactics and provides opportunities for aggression.

Even if you are not particularly into spectating sports on TV, watching the Tour feels like an extended travel show, with gorgeous helicopter shots of mountains, chateaux, rivers, lakes, vineyards, sunflowers, bridges, and cities. The race organizers ensure that the announcers have ample historical and cultural information at their fingertips to share the wonders of La France!

A stage race is known not just for having multiple stages, but also for the variety of stages included in the race. These can be broadly categorized as time trials, sprint stages, and mountain stages.

The Tour this year will have two individual time trials- the 15k opening stage in the central part of Copenhagen, and a very hilly 40k on the second to last day of the race. Unlike many stages where riders start and sometime finish in massive bunches of riders, in a time trial, each rider begins and ends the race alone, starting a minute apart. Time trialing is a very specialized skill. It is the ultimate expression of challenging the man, muscles, and machine.

Flat and some hilly stages usually provide an opportunity for sprinters to shine at the end of the day. These athletes are capable of riding 200 kilometers and then using massive amounts of leg power to accelerate to victory in the final 200 meters! Watch for heart-stopping moments of bumping handlebars and helmets in these few final seconds on each sprint finish. While the final day of the tour (July 24) is mostly a victory lap for the General Classification winner, the race erupts into an eight-lap criterium-style hammer fest on the cobblestones of the Champs d’ Elysée for the final stage victory. Every sprinter dreams of crossing the line first on “the Champs.”

I enjoy the mountain stages the most. Cyclists talk a lot about suffering. In the mountains, there is nowhere to hide from the suffering, whether you are the strongest rider or the weakest. The eventual yellow jersey winner will likely be the strongest overall in the big mountain stages and the peaks provide the most opportunity for aggression to result in success (or failure). This year features six mountain stages with five summit finishes in four separate mountain ranges. Watch stages 9-12 to get a good look at the Swiss and French Alps and experience over 12 summits in four days!

Other stages to particularly watch out for are the second stage in Denmark with a very windy 18k bridge crossing and stage 5 over the cobble stone lanes of northeastern France where the annual “Hell of the North” Paris-Roubaix race occurs.

In the previous section, I used a lot of hedge words like “typically” and “usually.” This was deliberate because of a wildcard that stage racing offers to keep things unpredictable- the breakaway! When you watch a stage race, there is almost always a small group of riders that jump off the front of the pack (peloton) near the beginning of the race. Known as the breakaway group, these riders consist of athletes chasing intermediate points for the green and polka-dot jerseys, unknown riders looking to give their sponsors TV time (TV always covers the front of the race), or teammates of contenders riding up front for tactical reasons. Generally, breakaway riders are not expected to win the stage…BUT…sometimes they do!

TV coverage will display on the screen the various groups of riders on the road, where the key jerseys are located in the field and how far behind the lead group they are. In the years I have watched bike racing, I have seen amazing things happen out of the breakaway- solo attacks that stayed away until the end, breakaway groups getting caught and passed at the finish line, and everything in between. The “will they or won’t they” nature of the breakaway is just one more reason I love watching this sport.

As of June 16, these are the American riders scheduled to race in the Tour de France and their teams:

If you are new to watching European bicycle racing, you may encounter some unfamiliar terms- some of them French. While the NBC broadcast is in English, the video feed and graphics are shared by the host nation.

Whether you are an avid cyclist, endurance sports fan, or just a Francophile, I hope that I have inspired you to add bike racing in general — and the Tour de France in particular — to your sports viewing calendar. As you will see if you give it a chance, the Tour is so much more than guys in colorful outfits riding around the French countryside. Entire towns take the day off to cheer the riders when they come through, and people sleep out for days on the side of the road to be on the big mountain passes for the race. I can’t make it to France to see the greatest spectacle in sport, so I’m going to watch it here. I hope you set your alarm clock (or DVR) and join me.