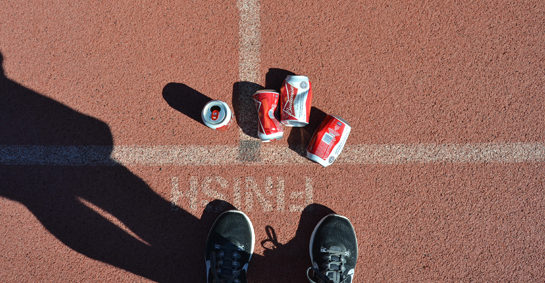 April 7 marks National Beer Day. What better way for athletes to celebrate than with a Beer Mile?

For the uninitiated, competitors drink four cans of beer and runs four laps on a track, downing one beer before each lap. As the challenge has gotten more popular, runners have registered some eye-popping times; Canadian Corey Beltmore holds the men’s world record at 4:34 and Erin O’Mara clocked the women’s record in a cool 6:08:51.

So if you’re looking for a fun break from your hard workouts or an alternative to a night out, consider a Beer Mile (as long as you’re 21 or older, that is).

Pre-Beer Mile
1. First of all, some disclaimers.
Put simply, drinking and running can compromise your immune system and muscle coordination. So if you’re nursing an injury or illness, try the Beer Mile another time.

2. Bring a friend.
Don’t plan on driving yourself: Each can of beer will increase your BAC by 0.02, putting you at the legal limit for driving at beer four.

Risk of DUIs aside, you’ll want a (sober) partner to assist you in case of illness or emergency. Besides, what’s a beer mile without a few friends to cheer you on?

3. Carb-load and hydrate beforehand.
…preferably not with beer. Drinking on an empty stomach isn’t advisable, so sprinting and drinking, without anything your system, spells disaster. To fuel without risking indigestion on the run, have a quickly digesting, high-carb snack pre-run, like an energy bar or bagel.

4. Pick your poison
Each 12-ounce beer occupies about 1.5 cups of volume in your stomach, which has a 4-cup capacity. Needless to say, you’ll be feeling a little full by lap four.
Minimize the sloshing in your stomach with a lighter beer.

But no O’Doul’s for you: You’ll need to adhere to the 5 percent blood-alcohol-volume minimum.

According to beermile.com, Budweiser and Pabst Blue Ribbon are the most popular choices. But whatever you pick, make sure it tastes good. After all, this is supposed to be fun!

5. Know the rules
​Creative runners can find many loopholes to log faster times, but the beer mile is regulated by standard rules.
​
Each can of beer must be consumed before beginning each lap, so no pouring Coors into your Camelbak and drinking on the run. No shotgunning or choosing wide-mouth cans, either; rUber’s are also prohibited from tampering with their beer cans in any way.

And once you swallow the beer, do make sure it stays there. If you vomit mid-race, you’ll need to complete a penalty lap at the end.

Mid-Beer Mile
1. Nail your technique.
Sure, you know how to run and you know how to drink, but combining the two requires serious efficiency. Josh Harris, holder of a 5:04.9 beer mile, shares his strategies to minimize wasted time and motion:

“Don’t put your whole mouth around the bottle if you want to drink fast,” he says.. “It is important to let some airflow into the bottle by sitting the beer on your bottom lip, and pouring it down your throat. I like to pour it down at an angle of close to 45 degrees. Once I learned the technique to drink a beer fast I improved my maximum speed out of a bottle from 10 seconds to around five seconds.”

2. Watch out for common health hazards.
Nobody does a beer mile for the health benefits, but there’s no sense in risking long-term damage for one mile of running. So between laps, take a moment to monitor your body’s signals.
Slow down or stop if you feel dizzy or notice any unusual heartbeats, as exercising immediately after drinking can reduce your coordination and induce abnormal heart rhythms. Also watch out for GI distress, cramping and vomiting.

But remember that alcohol will also impair your judgment, so have a spectator serve as another pair of eyes.

The standard rules of drinking apply to the Beer Mile. For a smoother wake-up the following morning, bring a few water bottles to drink immediately after the run.

Research shows that alcohol consumption can inhibit muscle recovery. So if your balance allows for it, stretch and foam roll after finishing.

3. Celebrate!
​After all, not everyone can run a mile on four beers.