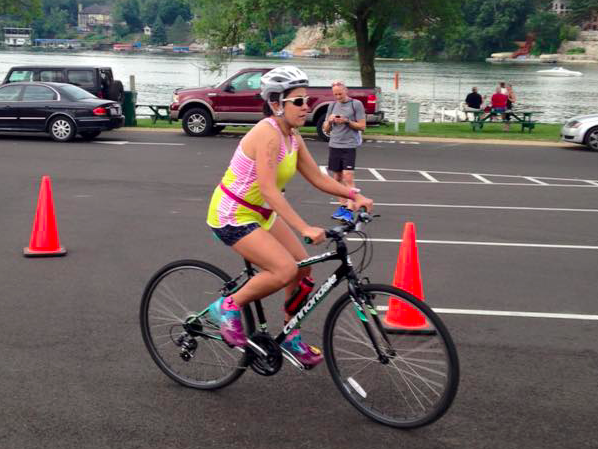 A few hundred triathletes gathered for the 8th annual Holidayman Triathlon in Somonauk, IL. The small town is a great setting for the race with challenging climbs including one large hill on the bike course; Holiday lake that was calm and perfect wetsuit legal temperature this year.

Somonauk is southwest of Chicago and approximately 65 miles from downtown.  With same day packet pickup and racking, Chicagoland athletes can save on a double day weekend and hotel. Racers either paid for premier parking which was literally right next to transition or parked about a mile away and took the shuttle.  A general course talk was given about 15 minutes before the first wave.

The race started at 7 a.m. with Olympic athletes going out first in two waves. Olympic athletes completed two loops of the swim course with sprint racers doing one. Once onto the bike, racers made their way onto country roads.  Roads were well kept with a nice stretch with the wind to your back and the slightest descent. However, that all came to a halt when all distances faced a large hill climb around mile 11.  Once riders made it to the top, they were handed a wristband to signify they made the climb.  Two more wristbands were used for Olympic athletes to show they did two loops on the bike and two loops of run.

Once racers transitioned to the run, they were greeted with rolling hills. There were some residents out supporting the race and cheering the athletes.  My favorite was the grandparents and grandchild with their own Gatorade station. There was one aid station on the run that was passed twice for sprint and four times for Olympic.  Runners were greeted with a nice finisher chute, medals and Subway sandwiches at the finish.

This was my first time at this race and I really enjoyed it.  While I am not usually a fan of the looped courses, especially the swim, I found it helpful with watching my times and gauging effort. The race was well run and will be back in the coming years!