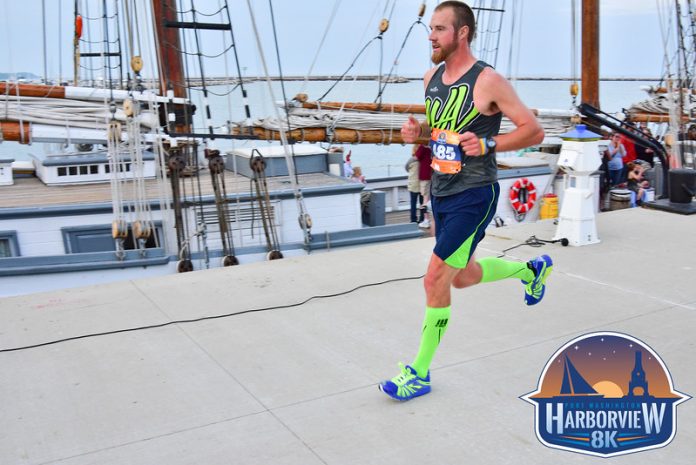 On Saturday, Lighthouse Events hosted their inaugural Harborview 8K in Port Washington, Wisconsin. This uniquely distanced race took place along the lakefront in the quaint community of Port Washington, just one hour north of the border during the community’s annual Pirate Fest.

The three-day festival featured characters dressed up as pirates mingling with festivalgoers as they enjoyed bounce houses, games and popular carnival foods. As racers walked up to registration, aromas of funnel cakes and nachos delighted our noses. I was actually offered a huge chunk of a hot pretzel as I walked up to pick up my packet. Regrettably I declined as the temperatures were in the mid-80s and I wanted to keep my food down during the race.

The race began at 7:30 p.m. just as the sun was beginning to set. Racers ran through pirate fest where festival attendees were lined up to offer high-fives, cheers and pirate guffaws. Racers enjoyed the beautiful lakefront and a massive pirate ship as they headed out to a paved trail to circle through the neighborhood.

This beautiful course was not only scenic, but also extremely challenging. Racers wove through steep and steady inclines before making their way back down. The course brought racers back through Pirate Fest before circling back the other direction where racers tackled another incline before enjoying a nice decline to the finish line. Prior to the finish line racers crossed a bridge that was lined with white lights, providing a memorable experience as the sun was setting.

All finishers were given a metal along with post-race goodies of fruit snacks, cookies and water. Swag included a light weight black hooded sweatshirt, perfect for the cooler summer nights by the lakefront.  Cheerful volunteers and race staff lined the course to ensure everyone took the correct turns. As always, Craig Braun, race director and owner, was at the finish line offering high-fives, hugs and words of encouragement.

This inaugural race was attended by over 500 runners and was well received throughout the community. Lighthouse did a great job and this runner can’t wait to attend again next year!