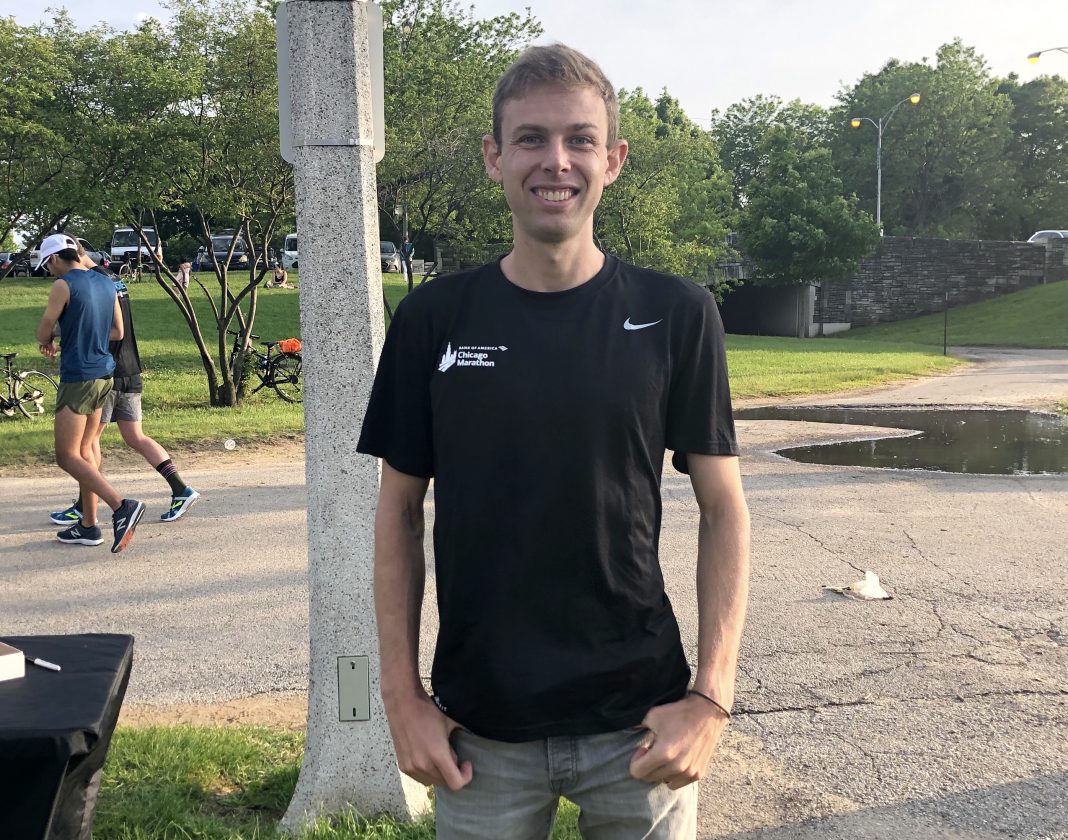 In honor of Global Running Day, 2017 Bank of America Chicago Marathon champion Galen Rupp came out Wednesday night to meet Chicago-area runners at Montrose Beach.  Attendees were able to take pictures and chat with Rupp before going out on a three-mile fun run with the Chicago Area Runners Association along the lakefront.

While the runners were gone, Rupp talked about his personal goals and plans heading into marathon training season, as he focuses on his third Bank of America Chicago Marathon this October.

“The goal is still the same as in the past; hopefully running fast!” Rupp says.

Following the 2018 race, where Rupp came in fifth overall with a time of 2:06:21 – his second fastest marathon time – he underwent surgery on his Achilles. As a result, he decided to not run a spring marathon and took the time to slowly recover. Now, he’s eager to get back into the longer training cycle.

“It’s been a long time since I’ve raced so I’ll probably do some shorter road races this summer but I don’t have anything planned at the moment,” he explains. “I always try and do a half marathon a month or six weeks out so that will be the plan again.”

As far as what that training will look like, he said there won’t be much change. He’s already started to do some interval training, but is welcoming the slower build into a normal schedule.

He is currently training in Portland, Oregon, which is where he grew up and his family is. In fact, he attributes his motivation to his family, because they’ve been his biggest support system.

“People talk about the sacrifices they make for training, but I think my wife has sacrificed more than I do,” Rupp says. “She’s given up so much to allow me to go after my dreams, so there’s a big part of me that feels like I owe it to her and my kids to take it as seriously as possible and do my best on race day.”

He also credits his coach, Alberto Salazar, for all that he’s taught him and done for him.

Even before running marathons, Rupp spent a lot of time in Chicago; his father grew up in the city, and he has fond memories visiting as a kid. As he prepares for round three in the marathon, he feels confident as he knows the course a little better.

“I love running through Chicago; it’s such a pretty backdrop and you see a lot of different views from a lot of different areas,” he says. “The crowds are fantastic too, and nothing beats seeing that clock at the end and being proud of your time.”

Although Chicago is his only marathon this year, Rupp says he’s really come to love the distance and training that goes into it.

“It’s so cool because so much work goes into one race,” Rupp adds. “With track, if you have a bad race, you can do it again next week and improve. With the marathon though, you have one chance to get it right. When so much goes into it, the reward is that much sweeter.”

His advice for fellow marathoners is to stay positive; finding small goals along the way, such as getting to the next water stop (a target Rupp himself has used in races), will make the bigger picture seem less intimidating.

“It’s obviously very physically demanding on your body, but so much of the marathon is mental, too,” he adds. “Everybody goes through rough patches, but it’s about being comfortable with being uncomfortable.”

As runners were coming back from their fun run and enjoying some ice cream provided by CARA, Rupp mentioned that his go-to post-race indulgence is usually something greasy. So, be on the lookout for Rupp enjoying some Chicago-style pizza after crossing the finish line this October.

How to Balance Life and Triathlon Training