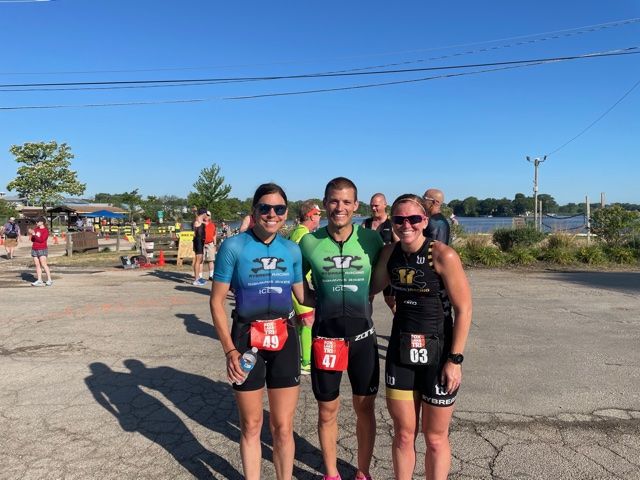 The state of Illinois might have been one of the states with the most restrictions during COVID, but that makes our grand opening that much more meaningful. And what better way to do that than TRIATHLON!? The Fox Lake Triathlon was the perfect way to get back into the swing of things after 15 long months of lockdown, complete with lake water so hot that wetsuits were ILLEGAL! In case your wetsuit didn’t fit from too many COVID lbs, you didn’t have to worry about it today! The water was a balmy 85 degrees, followed by a bike course that exposed any workouts you may have skipped over the winter. The run course was fairly flat with one hill that you had to climb out of transition. And the sun was definitely out to play as well, keeping you on that hydration game.

The 800-yard swim was an easy to follow triangle, not only marked with giant duck inflatables at each turn, but also marked with a sighting buoy every 150-200 yards. With the water temperature being over 82 degrees, athletes either wore swim skins or just their tri kits. 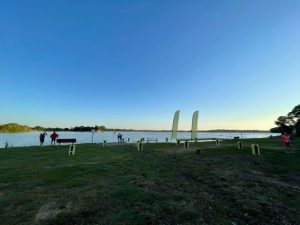 The 11.5-mile bike began with a giant hill coming out of transition followed by a quick right turn. Volunteers and police officers were excellent at directing bikers and keeping athletes safe on the course. The course was hilly but kept the race honest and challenging. 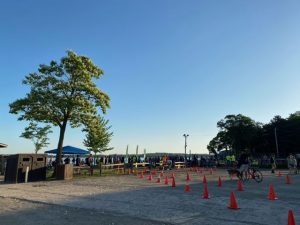 After biking 11.5 hilly miles, athletes were greeted with smiling volunteer faces in transition before putting on their running shoes for an out-and-back 5k. Athletes encountered a quick up-and-down hill that they’d meet again on the return, but once on the bike path, it was a fast and flat run. It was fun to see other athletes throughout the entire run portion of the course as it kept us all focused on finishing what we started.

The volunteers were amazing and the whole race site was full of such positive energy and excitement with athletes finally returning to racing. This race wouldn’t have been possible without Race Director Trudy Wakeman. She made sure all of us in the surrounding Lake County area had the return to racing dream come true we’d been hoping for. And boy was it everything we’d hoped for and more!

Common phrases could be heard echoing through transition as the race neared the 6:30 start time for the first wave.

“This is my first triathlon in two years!”

“We really swim to the rubber duckies! Awesome!”

For me (Jim), the sounds of the race really brought the reality of this event into focus. This was a real race – a real triathlon. The sounds of zippers zipping, helmets snapping, bikes racking, instructions booming over the crowd via an amplified sound system – these were the sounds that have been missed dearly by all of us since the beginning of the pandemic last year. 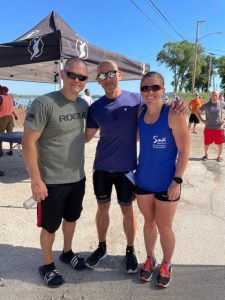 We’ve all been training. The giant hill at the beginning of the bike course was like any we’ve seen on our rides. The lake was just a lake. The pavement felt the same under our feet.

That’s not to say the race wasn’t a challenge. The warm water prompted the dreaded “no wetsuits allowed” announcement, which spins many triathletes into a frenzied panic about the sudden loss of speed and buoyancy. The giant hill was at the start of the bike course, with the climb beginning after a right turn where athletes began the long, steep incline with no momentum. Both my legs and heart were screaming at me by the time I got to the top. The run course threw its own punches at the beginning and end as athletes called upon tired legs to carry them up and down the rolling streets near transition.

Most importantly, though, this looked and sounded like a race. I missed the splashing sounds of fifty people swimming around me. I missed the sight of police officers in the streets, halting traffic with raised arms so I could blast through the intersections without the slightest reach for my brakes. I missed the names called out at the finish line as athletes took those last few steps over the final timing mat.

So did many other athletes. And thanks to Race Production by Trudy, roughly 150 other people got to experience the same sounds and sights of race day, many for the first time in years.