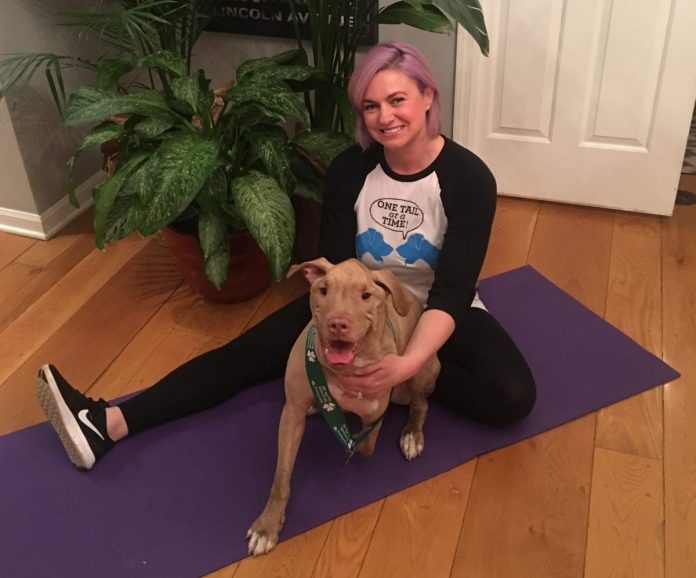 When Stephanie McCutcheon was walking down the street near her home one day, she saw a three-legged Pitbull up for adoption and immediately fell in love. Despite her husband’s hesitation due to the other two dogs the couple owned, Stephanie adopted Seven a month later.

The agency Seven came from is called One Tail at a Time (OTAT), a no-kill, all-breed dog rescue that strives to lower euthanasia rates in the Chicagoland area through rescue and adoption. After welcoming Seven into the family in 2012, Stephanie became an active member in One Tail because she loved its mission, and two years later took on the role of an associate board member.

“Shelters like One Tail are trying to work together for animal care control, and not having dogs be euthanized,” Stephanie explains. “Ways we can help are with fundraising through events and parties, and fostering the dogs.”

Aside from an auction fundraiser at the end of the year, one of the bigger events One Tail raises money through is the Bank of America Chicago Marathon. Although Stephanie had never even ran a 5K before this year, she is determined to cross that finish line in October.

“I know that I am in over my head but I think it proves my dedication and insanity towards helping dogs,” Stephanie says.

Because she’s never been a runner, Stephanie is most nervous for the training aspect. In addition to her work with dogs at One Tail, she owns her own dog-walking business, where she walks up to 10 miles a day.

However, she began her running journey in April at the Bank of America Shamrock Shuffle in April, where she celebrated her accomplishment with Seven after. Throughout her training, Stephanie plans to find more short races during the summer to get herself into the competitive mindset.

“What’s the worst thing that can happen? I’m crawling or I’m last?” she adds. “It’s been a thing I’ve wanted to do for quite some time even though I’m not a runner, and I couldn’t think of a better way to do it than with One Tail.”

About 25 OTAT members will be running with Stephanie on Oct. 8, hoping to raise money to save dogs lives … one tail at a time.