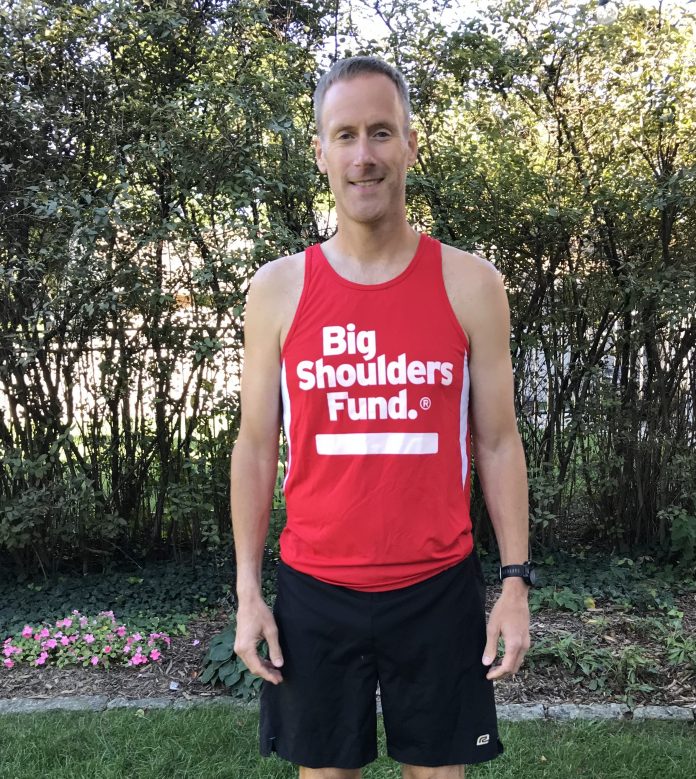 Andrew Murray started competitive sports with high school football and track in the town of Sylvania, Ohio. Back then, little did he know where it would lead him and how it would positively affect his life.

While a member of the Notre Dame Rowing Club, Murray supplemented his training by running. His rowing has stopped but 25 years later, he is still a runner.

Murray completed the 41stannual Bank of America Chicago Marathon this October; it was his fourth marathon, but his first as a charity runner. He was a member of a local non-profit organization called The Big Shoulder’s Fund [BSF] based in Chicago.

“My wife, Katy and I are long-time supporters of the Big Shoulder Fund,” Murray says. “It’s racing team offered the opportunity to combine two passions: helping some of Chicago’s most vulnerable kids achieve their dreams and training for a marathon.”

In April, Murray ran the 2018 Glass City Marathon, which he calls his most memorable race. It took place in his hometown of Sylvania, and he ran in front of friends and family accomplishing his two objectives: a new PR of 3:07:58, and his first Boston Qualifier for the 2019 race. His most important running accomplishment was to embrace the process of balancing a career in corporate finance and family while training to improve his time. This enabled him to beat his marathon PR from age 26, 13 years later at age 43.

“Returning to serious racing in recent years while balancing work and family is the biggest challenge,” Murray adds. “Having a wonderfully supportive wife, and daughters Elizabeth and Grace, who appreciate my passion for the sport, makes a world of difference. Finding time to train involves building out our schedule of family activities and being willing to be flexible where need be.”

Murray was successful in finding the correct balance in his training for year’s Chicago Marathon. With tough conditions on race day he crossed the finish line in 3:13:33 while achieving the three goals he had set: a Boston qualifier for 2020, a Chicago qualifier for 2019, and finishing strong with no injuries.

“After a training season of often lonely runs, I embraced the atmosphere and celebration of marathon day in Chicago, including the guy handing out cups of beer at mile 22,” Murray reminisces.

Next on Murray’s race schedule will be the 2019 Boston Marathon.

“What I enjoy most about running and competing is learning where my limits are and how I can manage up to and through those limits over time with a continuous commitment to improving,” Murray says. “I am looking forward to my first Boston Marathon this April and then returning to Chicago in October 2019.”