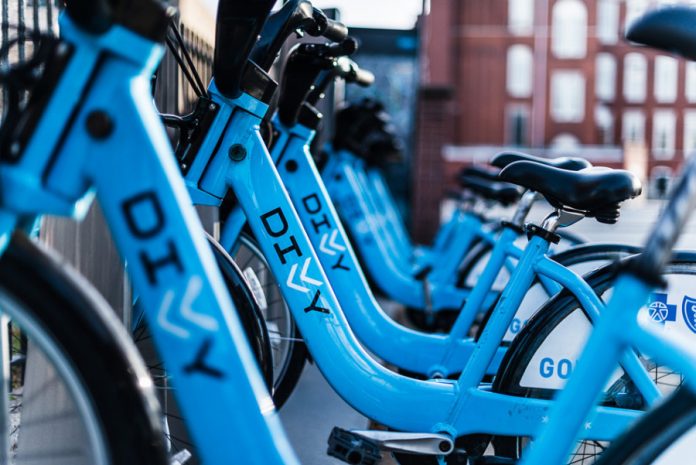 Divvy is adding more than thirty stations to the popular bike share system over the next few months to account for growing ridership, help build ridership and build in more flexibility in a few of the system’s busiest neighborhoods, Divvy leadership and CDOT announced today.

The installations begin today with the completion of a new station at the Malcolm X College campus on the Near West Side.  From there, Divvy will install new stations in the River North, Englewood, Ukranian Village, and several more neighborhoods of Chicago. The new stations are  funded through the federal Congestion Mitigation and Air Quality program.

“We’re very pleased to be at Malcolm X College to unveil the first of three dozen new Divvy stations we will be rolling out in  the coming weeks,” said CDOT Commissioner, Rebekah Scheinfeld. “CDOT remains committed to continuing to build out the Divvy system citywide.  These new stations will improve the existing network by adding density to create a more robust system. And they will help to build our rider base to ensure the strength of the program.”

“Divvy’s popularity increases year over year. We’re focused on meeting demand every step of the way,” said Michael Critzon, General Manager of Divvy. “Now, when you finish your ride, you’ll be more likely than ever to quickly find an open dock, ensuring that bike share stays one of the most fun and seamless ways to get around Chicago.”

“As City Colleges’ center of excellence in healthcare, Malcolm X College is thrilled to host a new Divvy station, offering our students, faculty, staff and community members a way to achieve an active lifestyle and easily commute to and from our college’s convenient location in the heart of the Near West Side,” said Malcolm X College President, David Sanders.

Blue Cross and Blue Shield of Illinois (BCBSIL) signed on in 2014 as the System Sponsor for Divvy. BCBSIL’s community investment not only supports the Divvy system, but also supports bike lanes and bike facilities.

“We support healthy biking because it’s a win-win: a good-for-you and the good-for-the-environment way to get around,” said Clarita Santos, Executive Director of Community Health Initiatives for Blue Cross and Blue Shield of Illinois. “Divvy’s new stations will give even more people the chance to fit biking into their daily lives.”

To celebrate these new installations, Divvy will host pop up events at new stations. Divvy Outreach Leaders will be available to answer questions about how to use the bike share system and hand out free passes for neighbors to try the blue bikes. The Divvy team will announce these events via their email newsletter and Divvy Bikes social media channels.

2018 has been a banner year for Divvy, with new features and services to improve the experience for riders like the Divvy App, that allows riders to access bikes from their mobile devices, already downloaded almost 100,000 times. Divvy has also increased ride time for members from 30 to 45 minutes, improved its kiosk interface, and introduced bike trains to move more bikes without the carbon emissions.

Divvy ridership has continued to grow year over year, as new pricing makes it even easier to get around Chicagoland. The new $3 Single Ride for thirty minutes provides an affordable way to try the bike share program before joining as an $99 annual member. Since the new pricing launched February 1, nearly 300,000 Single Rides passes have been sold throughout Chicagoland.

The effort to spread awareness and grow ridership in Chicago neighborhoods continues with the work of Divvy’s in-house Outreach Leaders. Partnering with local organizations to provide support for community events is boosting Divvy’s presence as a community resource. The Divvy for Everyone subsidized membership program continues in 2018 after rolling out new ways for riders to demonstrate eligibility, and more affordable long-term pricing,  gradually increasing over four years from $5 the first year to $25 the second year, $50 for the third year, maxing out at $75 a year – similar to a student membership.