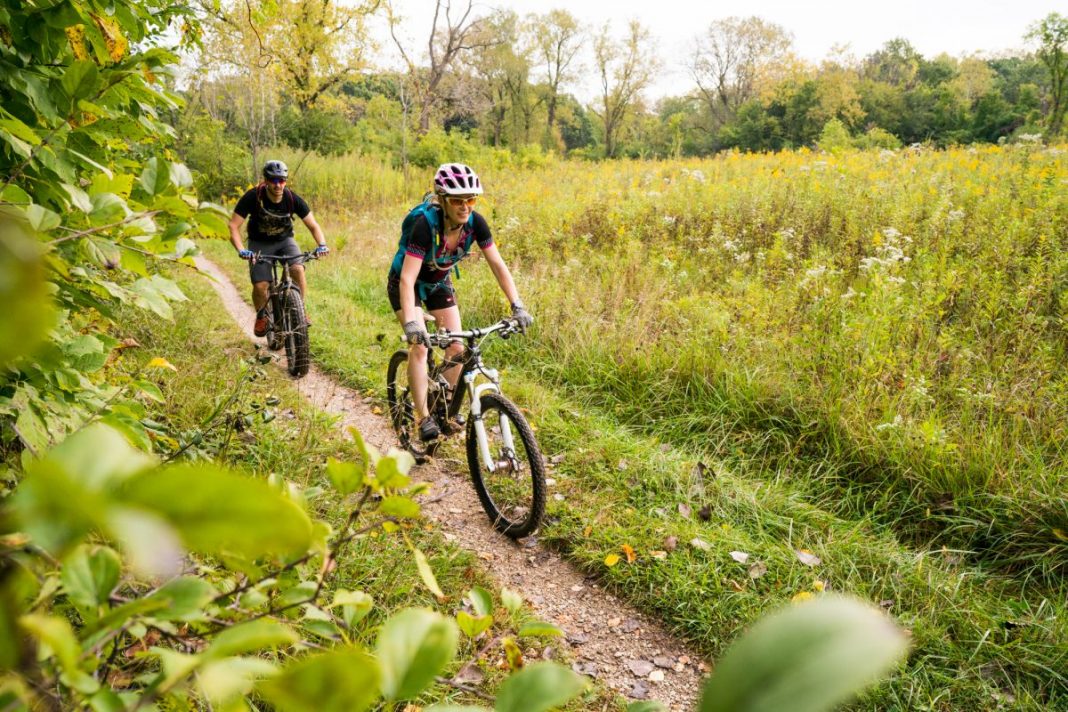 In all the ways that Chicago and its surrounding area is so magnificent, it is the unfortunate truth that we are a bit vertically challenged when it comes to landscape. While most of what makes off-road riding fun is a change in elevation, the city does have options beyond a small grassy knoll to get mud in the treads of some of your favorite dirt friendly bicycles.

The options are growing every year, with the most recent opening last fall at the free outdoor bike park at Big Marsh on the southeast side of the city.  As Big Marsh strives to continue its expansion up to four times its size over the next several years, there are a few other Chicagoland staples to rip up some single and double track (and maybe even some jumps) including Palos Hills to the Southwest, Saw Wee Kee to the West, and Beulah Park to the North.

Starting with the new, Big Marsh is putting itself on the map (literally) by slowly taking over a 278 Acre former industrial site on Chicago’s far southeast side by systematically transforming into an off road cycling mecca.  With the goal of hosting the Cyclocross National Championships within the next five years, they are seeing the support and usage needed to continue the progress towards a growing and accessible multi-disciplinary park that caters to a wide range of dirt riders.

Technical terrain includes pump tracks, singletrack, flow trails, jump lines, short track and cyclocross race courses.  Big Marsh caters to riders who would otherwise have to travel much further outside of the city limits to find similar conditions good enough to practice and race on.  On a cyclocross bike, the site is close enough to ride to, get in an evening of skills and handling practice and make it home before sunset.

Even mountain bike riders looking to get in both endurance and skills training can opt to ride slick tires there, while using some knobbies that they carry in their backpack for their time in the park.  It’s this sort of creativity that local mountain bike riders will be especially used to in while searching for spots to enjoy and train in.

For a more classic Chicago mountain bike option, most people will know and suggest Palos Hills.  Home of Chicagoland’s premier mountain bike event every August, The Palos Meltdown, the area boasts close to 40 miles of both single and doubletrack riding.

Including sections of steep elevation, it’s set against a backdrop of beautiful thick woods lined with creeks and ponds.  The elevation changes are enough to trick the legs and lungs into momentarily thinking you are somewhere other than the flat state of Illinois.

Being only a 30-minute drive from the city center makes this destination an easy one when it comes to getting in some true mountain bike hours.

Another really fun option, albeit smaller and further away, is the Saw Wee Kee Park on the south shore of the Fox River in Oswego, Ill.  The landscape is lined with five miles of steep inclines and quick descents.

Equal parks BMX pump track and mountain bike singletrack course, Saw Wee Kee is a unique park that has just enough options for spending a few hours getting slightly turned around in its maze-like setting of trails that zig-zag and cross each other alongside the river.  Since it only takes one or two times in the park to hit up each section, you can use it to refine your skills by practicing on the same stretches to master the right speed and angles to take at every turn.

A lesser known option on the far north side is Beulah Park in Zion, just south of the Wisconsin border.  Beulah is a heavily wooded city park that runs along a ravine and small creek with sections of paved bike paths and about five miles of single-track trails.

In 2013, the mountain bike trails in Beulah Park that were created over the previous years became official and are now managed by Chicago Area Mountain Bikers (CAMBr).  Working closely with the city of Zion, CAMBr has created this destination trail system in the far North.

“Zion is an accommodating city with a great beach and a cycling vision and the unique trail system will continue in its past tradition, tight, twisty and feature rich,” the CAMBr website says.

For an even closer and more creative option, try taking your mountain or cyclocross bike out for a slow speed skills challenge by riding the middle of the Boulevard System, which travels mostly north and south from Logan Square to Douglas Park just south of the Eisenhower (290).  Curbs, tree debris, picnicking families and other ad-hoc gardens become the obstacles to riders as you weave your way through the stretches of green boulevards.

Use this is a training method by riding the boulevards easy, and then doing a hot lap or two around along each park as you pass them, including Humboldt, Garfield and Douglas.

Once you have mastered the ability to navigate twists turns and other obstacles, while keeping both tires firmly planted on terra firma, try your hand with a bit more air action at The Garden, Chicago’s Dirt Jump course.  Located conveniently on the east shore of the North Branch river between Addison and Belmont, try your hand on a true BMX course between three jump lines and a pump track with multiple routes. The Garden is free, open to the public, and has terrain for all ages and skill levels.

With these options (and more unmentioned ones still to discover), a weary Chicago mountain biker or off road enthusiast can start to piece together some great riding to expose oneself to a multitude of terrains, styles and challenges to help develop the skills needed to be a more proficient dirt rider.  Then when that next trip to the big mountains comes along, you will be ready to rip on day one, versus navigating that tricky feeling of getting acquainted to the elevation and terrain difficulties of the big off road riding areas of the country.