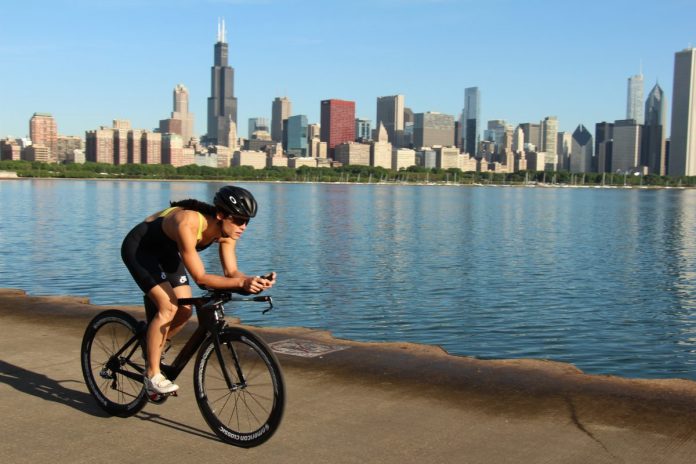 When Chicago Mayor Rahm Emanuel was running back in 2010, he said one of his main goals was to make the city the most bike-friendly in the United States. Goal achieved.

As of Monday, Chicago has been recognized as the best bike city in the United States by Bicycling magazine, bumping New York City from its steady spot at number one.

The Windy City spun away with the title because of its recent emphasis on separating cyclists from motorists, Bicycling Magazine Editor in Chief Bill Strickland tells the Chicago Tribune.

Nearly 148 miles of bike lanes have been added in Chicago in the last five years, the Tribune reports, including 108 miles of protected lanes. The protected lanes are marked by either white stripes or are completely green to separate riders from the driving lane. Off-street bike trails cover 47 miles throughout the city.

When the 100 miles of protected bikes lanes Emanuel promised are completed next spring, Chicago will become the first major U.S. city with a downtown network of protected bike lanes, in conjunction with its Loop Link transit project, the article adds.

In fact, New York can take some lessons from Chicago; Strickland says NYC needs to add more protected bike lanes and do a better job enforcing rules for both cyclists and motorists.

“Awareness of infrastructure, through separated bike lanes, is the next thing that needs to happen to really change cycling and what it means to live in an urban area,” Strickland says.

The accessibility of Divvy was another factor in Chicago riding in at number one, as the bike-sharing program has recently expanded to smaller areas of the city. Chicago also recently implemented the Divvy for Everyone program, which is a membership opportunity for low-income residents.

The Chicago Department of Transportation says that Divvy rides are up 16 percent this year, with more than 34,000 Divvy members. Overall, the number of bike commuters has increased 157 percent in the last decade, Bicycling magazine states.

Bicycling magazine compiles this report every two years; according to the article, researchers sift through Census and department of transportation data of more than 100 cities, and consult with experts from different organizations to identify the 50 most bike-friendly towns. Among the statistics, researchers look at miles of bike lanes, percentage of female cycling commuters and number of cyclist-friendly bars.

“The goal is not only to help you plan your next relocation but also to inspire riders and municipalities to advocate for change,” the article says.