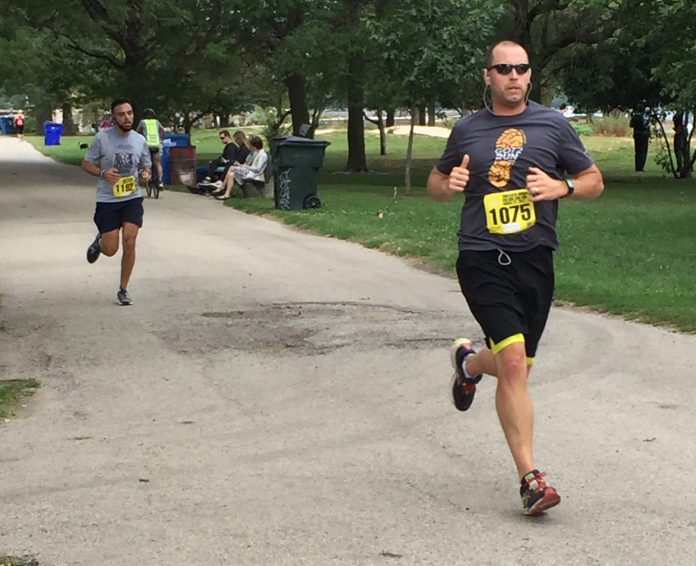 The race is held each year in support of lung cancer survivors and their families, and in memory of those who have lost the lives to lung cancer, the leading cancer killer in America.  The mission of the race is to raise awareness of lung cancer and to raise much-needed funds for lung cancer research.

There was no pre-event packet pick-up offered this year.  Participants picked up their bibs and shirts on race morning, with free gear check offered.  There was a vendor village which featured various activities, refreshments and giveaways provided by the race’s sponsors.

The morning began at 8:10 a.m. with a pre-race stretch.  Following that, the 10K race began at 8:30 a.m., with the 5K and 1 mile walk starting after at 9 a.m. The races were a loop course, starting at Montrose Harbor and running north to Foster Beach.  After turning around, participants ran south along the Lakefront Trail for a few miles before again turning around and returning to Montrose Harbor.

Since it was an open course, there were a few other runners, walkers and bikers out on the path along the course, but it was not overly crowded for a Sunday morning.  As we made our way north on the Lakefront Trail, it was fun to watch the bikers from the Chicago Triathlon out riding along Lakeshore Drive.

This was a relatively small race.  I chose to participate in it because my grandfather died of lung cancer almost 25 years ago.  As I ran this morning, I thought of him and wondered what he would think of me and all of the running that I do.  I had to imagine he would be proud.

There were mile markers at each mile along the course and a time clock at the finish line.  There was one aid station along the route that runners ran past twice.  Bottles of water and other snacks were provided for finishers at the finish line.  Awards were presented to the top three male and top three female finishers at a ceremony after the race.

Overall, it was a beautiful day for a race.  The cooler temperatures were a reminder that fall races are just around the corner!