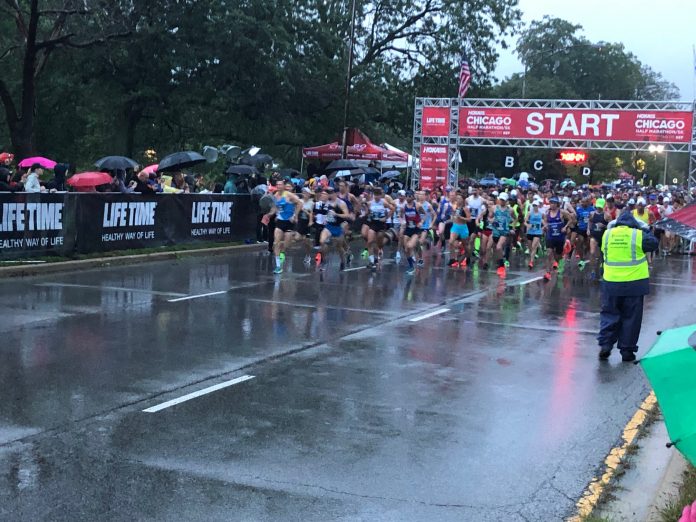 Once again, I am astounded by the dedication and grit of the Chicago running community.  Despite what was predicted to be horrible conditions, over 7,500 runners showed up for Sunday’s Chicago Half Marathon and almost 1,000 for the 5k!

After waking up to thunder and torrential downpours, I was a little nervous that the race might be cancelled.   I was planning to use this race as training run for my marathon in November, and really did not want to run in the rain alone!   I immediately checked the race Facebook page and was happy to see 2 updates already posted, including one that said the worst of the storm would pass by 6:00 a.m. and the race was scheduled to start on time at 7 a.m.

By start time, the rain had slowed down and most of the runners had ditched their ponchos in the corral.  A light rain followed us for the first few miles as we headed through the streets of Hyde Park.  The streets were a little flooded and slick, but manageable.  After heading north on Lakeshore Drive around Mile 4, the rain stopped and we were greeted with a cool headwind.  This was my first time running this race, but I have been told that the views of the skyline during these miles was spectacular.  Unfortunately, Mother Nature had other plans and instead covered the skyline with a nice layer of fog, so you almost forgot you were running in Chicago!  Luckily, Lake Michigan was very active from the storms and gave a nice show for those 4.5 miles north.

Before turning to head back south to the Finish Line at mile 8.5, we could see the elites flying by as they headed towards their last few miles.  Once I hit Mile 10 the rain came back, but after a few humid miles I welcomed it! The course got a little more slick as we turned from Lakeshore Drive onto Hayes Drive and towards the Finish Line, but I was grateful for Dave Kappas’ last minute warning to the runners before the gun went off to watch our footing in the last mile.

Because the rain had gotten heavier during my last few miles and after I crossed the finish line, I didn’t spend as much time as I would have liked at the post-party.  Thanks to the many downpours, the area was pretty muddy. The band was setting up despite the rain, and runners still enjoyed their Home Run Inn Pizza and Begyle Beer as they tried to navigate the muddy grounds! Even though it felt a little chilly with all that rain, the popsicles at the end was also a nice touch.

Overall, I thought the Chicago Half Marathon & 5k was pretty well run even with the unfavorable weather conditions!  The aid stations were decently spaced along the course and full of friendly smiles, even though they had been in pouring rain for hours.  My only complaint about the entire race was the packet pick up. On Friday, the expo portion was relocated to the parking garage due to the weather, however, before you could pick up your shirt you had to stand in line outside in the pouring rain.  The first group of runners who picked up their bibs (myself included) were given the wrong bibs, so we had to go through this process twice.  Other than that, my experience was good and I would definitely run this race again!